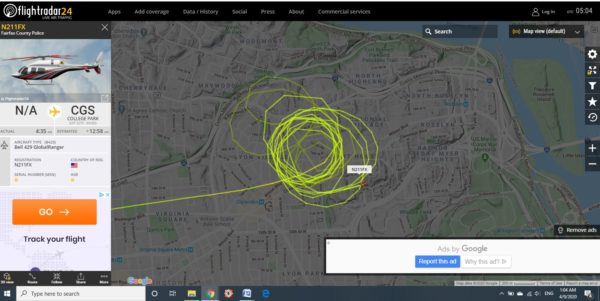 An officer spotted the wanted suspect near the intersection of Wilson Blvd and N. Garfield Street in Clarendon shortly before 12:30 a.m. Upon seeing the officer about to make a traffic stop, the suspect pulled his car over, bailed out and took off running, according to Arlington County Police.

The Fairfax County Police helicopter was called in to help search for the suspect. Despite the chopper circling the area for some 30-60 minutes — as seen in the flight path map above — the suspect was not found and the search was called off.

While the suspect made a clean getaway, another vehicle occupant was arrested and charged with drug possession and identity theft, police said.

NARCOTICS VIOLATION (Significant), 2020-04090001, Wilson Boulevard at N. Garfield Street. At approximately 12:22 a.m. on April 9, an officer on patrol observed a vehicle believed to be occupied by a known wanted subject. As the officer prepared to make a traffic stop, the subject pulled his vehicle over and fled the scene on foot. A perimeter was established and the area was searched with the assistance of Fairfax County Police Helicopter. The search concluded with negative results. The subject is described as a Hispanic male in his 30s, approximately 5’7″ tall with dark facial hair. He was wearing glasses, a black hoodie, black shirt and jeans at the time of the incident. Two additional occupants of the vehicle were detained by officers on scene and, following the investigation, one was arrested and charged. Cindy Tosti, 29, of Alexandria, Va. was charged with Possession of a Scheduled I/II Controlled Substance and Identity Theft. She was held on no bond. The investigation is ongoing.

The subject is believed to be wanted in Virginia for a previous armed robbery. Based on the preliminary investigation, there is no reason to believe he is currently armed. Anyone observing suspicious activity in the area is asked to contact police.

END_OF_DOCUMENT_TOKEN_TO_BE_REPLACED

More Stories
Another Rise in Local COVID-19 Cases, Amid Jump in Va. DeathsArlington Ranks as No. 1 Place for Working from Home