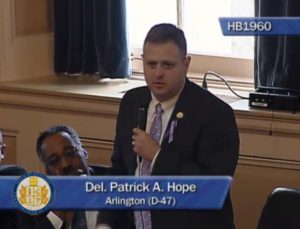 Knocking on doors last summer and fall, I asked Arlington voters their top legislative concerns. The largest response, by far, was for the General Assembly to take action to reduce gun violence.

That same sentiment has been growing across the commonwealth for years due to the lack of response to tragedies, such as, Virginia Tech, Sandy Hook, Parkland, Columbine, and more recently, Virginia Beach. But the gun violence prevention movement is not just about the mass shootings you see and hear about in the media. It’s the daily acts of gun violence — over 100 a day — occurring in our communities and firearm suicides that you don’t hear about.

According to the Centers for Disease Control and Prevention, in 2017 there were 1,041 gun deaths in Virginia. The Virginia firearm suicide rate has increased by 15% over the last decade and the firearm homicide rate increased 45%. Of all the suicides, nearly two-thirds are by firearm. Thirty-two children die by firearm every year in Virginia. Year after year, advocates from Moms Demand Action, Everytown for Gun Safety, the Brady Campaign, Giffords, and the Educational Fund to Stop Gun Violence come to Richmond to lobby for commonsense solutions only to be rejected.

But the 2020 legislative session would be different. I could tell gun violence prevention was going to be a rallying point for voters ever since Governor Ralph Northam, who called for a July 9 special session following a mass shooting in Virginia Beach, had his call to action thwarted by Republicans who immediately adjourned the session without taking any action. Virginia Democrats made gun violence prevention a central campaign theme in the 2019 election. Legislators finally listened to the voices of voters and we delivered.

House Speaker Eileen Filler-Corn tapped me to chair the House Public Safety Committee to oversee the passage of one of the House Democrats highest priorities: gun violence prevention. Those items that passed and recently signed by the Governor include:

These laws will save lives.

Other bills that passed include the requirement for a person to receive a concealed handgun permit to demonstrate competence in-person (patroned by Del. Alfonso Lopez); creation of a Virginia Gun Violence Intervention and Prevention Fund; adding child day centers to the list of schools where firearms are not allowed; prohibiting the possession/sale of bump stocks; and my bill to clarify school boards are prohibited from arming untrained personnel for school protection; and another to require family day homes to lock up firearms during operating hours.

The House passed a bill to ban military-style assault weapons and high capacity magazines but, unfortunately, the bill was defeated in a Senate Committee. This bill was patroned by Del. Mark Levine.

Critics say the House moved too fast. It may seem that way if you are used to doing nothing or preferred we did nothing. In my view, however, we struck the right balance acting only on measures that have been proven to save lives. Many of these bills have been introduced, studied, and debated for years. It was time to be responsive to Virginia voters and act.

Why does this issue mean so much to me and so many others? Kris Brown, Arlington resident and President of the Brady Campaign to Prevent Gun Violence, summed it up best when she recently tweeted: “There are too many children living in constant fear in their schools, in their homes, and in their neighborhoods. We owe them all a better future.” As the father of three children, I couldn’t have said it better.