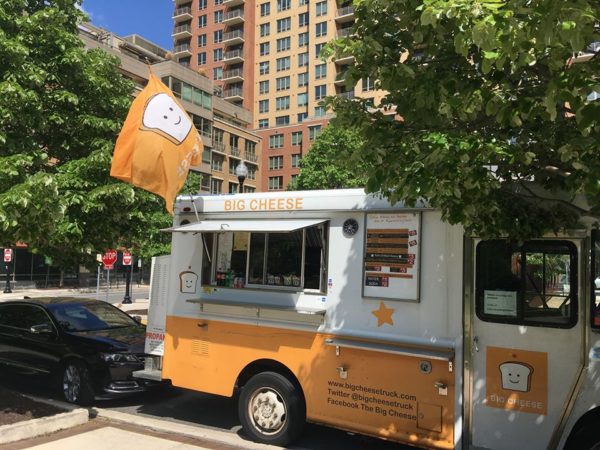 As the pandemic forces brick and mortar restaurants to close or switch to takeout and delivery, food trucks are filling the void by bringing the restaurant experience to residential neighborhoods.

Patrick Rathbone, the owner of the popular Big Cheese food truck, spent this morning (Tuesday) at Virginia Hospital Center making 50 sandwiches for medical workers there — 35 for those in ER and 15 for those working in the ICU.

On the Big Cheese website, people can make $10 donations to buy lunch for a hospital worker. So far, he said he’s made about 120 lunches for hospital workers and plans to keep it up through the pandemic.

Rathbone has a busy week planned, because after VHC he’s headed to the Westover neighborhood.  The usual roundup of Metro-accessible Arlington locations this week includes something different: a few stops in residential neighborhoods, like Fairlington on Saturday.

“I had been focused on vending at Courthouse, Clarendon, Ballston, Pentagon City,” Rathbone said. “They’re all the places where there’s high-density residential. It’s more business than sitting at home but hasn’t been exemplary.”

Rathbone said business is down 80-90 percent of what it usually is this time of year, when workers flood out of office buildings at lunchtime looking for a meal and some time outdoors.

While Rathbone said he usually has a staff of between six to eight employees, right now it’s just him. With business down in the high-density areas, he wanted to take a chance and bring Big Cheese to some of the less dense areas of the county.

“I live in Barcroft area, put a post on the Arlington Neighbors Facebook page just to see if people in neighborhoods would want a visit,” Rathbone said.

The post got a large response, with over 130 comments, many of them asking Big Cheese to come by their communities. Rathbone said Shirlington, in particular, seemed excited about the prospect of a food truck visit.

For Rathbone, it’s also a small part of offsetting the lost majority of his business.

“Basically, the business has gone from lunches and events catering to residential,” Rathbone said. “A big part of my business is event catering — all the weddings, PTA events, music festivals have all canceled. I don’t see how any of those are coming back this year at all. I am concerned, but I’m less concerned than if I had brick and mortar because that’s a lot more overhead.”

Rathbone said he’s also happy to be working, as it makes him less stressed than just sitting at home.

The Big Cheese isn’t alone in serving more residential areas. Food truck DC Slices has been offering pick up and delivery 951 S. Monroe Street, just off Columbia Pike. Astro Doughnuts also drew a crowd when its truck made a stop in a North Arlington cul-de-sac. 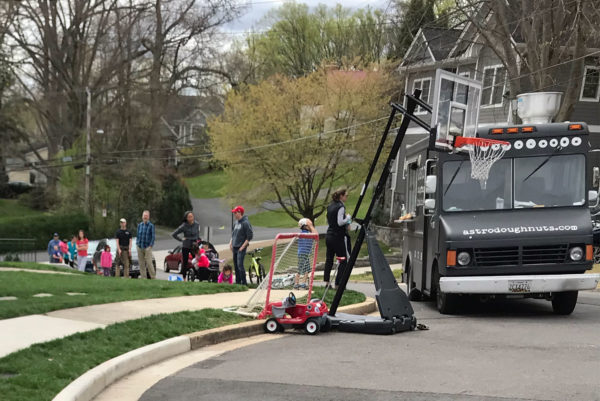 While still part of the high-density corridor, DC Slices is planning to stop at The Phoenix condos in Clarendon (1020 N. Highland Street) today (Tuesday) from 5-8 p.m. Rocklands BBQ has also frequented the apartment building in previous weeks.

Other food trucks have also been donating to help feed first responders on the frontlines of the coronavirus outbreak. Peruvian Brothers, a food truck that recently took over The Stand in Crystal City, has donated over 850 meals so far. Like Big Cheese, Peruvian Brothers asks for a $10 donation to help feed doctors, nurses, hospital workers, firefighters and police officers.

Rathbone said his food truck, like others, has done everything possible to minimize contact and keep things safe.

“I have online ordering and promote that heavily,” Rathbone said. “So people can order and get a text when that order is received, processed, and when it’s ready to pick up. I’ve stopped taking cash and it’s credit card only with a reader mounted outside the truck.”

Rathbone said his truck can also handle contactless services like Apple Pay. A service window at the truck is cracked just enough, Rathbone said, to get the food through.