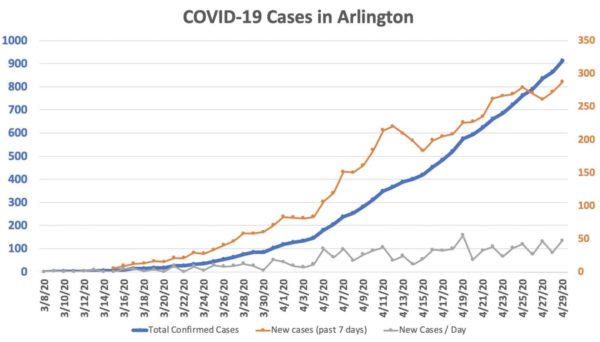 Another day, another few dozen positive coronavirus tests in Arlington.

As of Wednesday, the latest Virginia Dept. of Health data shows 912 known COVID-19 cases in Arlington, along with 163 hospitalizations. That’s up from 865 cases and 157 hospitalizations yesterday.

Numbers from the Virginia Hospital and Healthcare Association:

The not-so-good news is that the state and the county are lagging in terms of testing. It was reported today that Virginia “is tied for the second-lowest rate of COVID-19 testing in the entire country,” a disparity that officials have been trying to address.

In Arlington, there have only been 3,436 test results reported, enough to test about 1.5% of the population. On Wednesday VDH reported 47 new cases and 115 new tests for Arlington, an implied 41% positivity rate. From the start of the epidemic, the overall test positivity rate is 27% for Arlington and 17.5% statewide — both of which are considered high.

For reference, about 2% of tests come back positive in South Korea, and about 7% in Germany. Here’s how positivity rates break down in the different states in the U.S. 13/n pic.twitter.com/rNyRdVJofC

Arlington’s low testing rate and high positivity rate is a concern for two reasons. First, it implies that there may be many more cases in the community than are being reported. Second, widespread testing needs to be in place to be able to quickly identify new outbreaks and safely open up more parts of the economy, and Arlington is far from that point at the current rates.