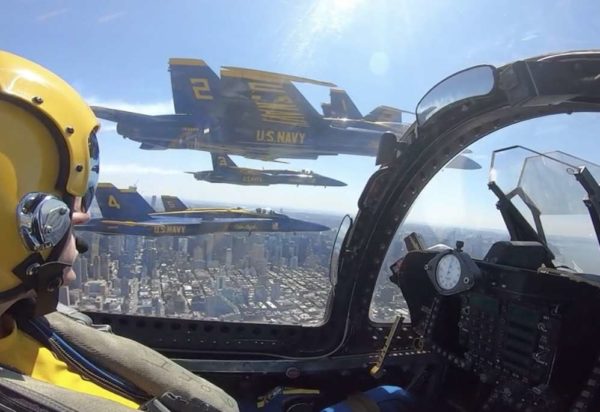 The Blue Angels and Thunderbirds will conduct a flyover of Arlington and the D.C. area around lunchtime tomorrow.

The Navy and Air Force demonstration squads will fly over the county twice between around 11:50 a.m.-12:05 p.m. on Saturday. A planned flightpath puts the jets over I-66 for the first flyover, and over Columbia Pike and the Pentagon for the second leg. 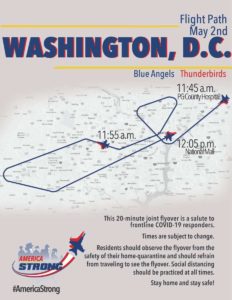 Other flyovers of Baltimore and Atlanta are planned Saturday, as part of the ongoing “America Strong” series of demonstrations over U.S. cities, promoting national unity. The photo above shows flyovers of Philadelphia and New York earlier this week.

“America Strong is a collaborative salute from the Navy and Air Force to recognize healthcare workers, first responders, military, and other essential personnel while standing in solidarity with all Americans during the COVID-19 pandemic,” the military said.

“Residents… will be able to see the flyover from the safety of their home-quarantine and should maintain all social distancing guidelines during this event.”

More from a Navy press release:

“America Strong is a way for both teams to show appreciation to the thousands of doctors, nurses, first responders and essential workers out there serving on the frontline day-in and day-out,” said Cmdr. Brian Kesselring, U.S. Navy Blue Angels commanding officer and flight leader for the flyover. “This is an extraordinary and unprecedented time but we will get through this. We are all in this together.”

A formation of 6 F-16C/D Fighting Falcon and 6 F/A-18C/D Hornet aircraft will conduct these flyovers as a collaborative salute to healthcare workers, first responders, military, and other essential personnel while standing in solidarity with all Americans during the COVID-19 pandemic.

“We are honored to fly over these cities in a display of national unity and support for the men and women keeping our communities safe.” said U.S. Air Force Lt. Col. John Caldwell, Thunderbird commander and lead pilot. “These flyovers are a gesture of goodwill on behalf of the entire Department of Defense to the heroes of the COIVD-19 pandemic.”

This mission, the second of several planned over the coming weeks, is the culmination of more than a month of planning and coordination between the two teams and numerous city and government offices.

Residents along the flight path can expect a few moments of jet noise as the aircraft pass overhead, along with the sight of 12 high-performance aircraft flying close in precise formation.

Flyovers in Baltimore will start at 11:30 a.m. (EDT) and last approximately 15 minutes.

Flyovers in Washington D.C. and surrounding communities will start at 11:45 a.m. (EDT) and last approximately 20 minutes.

Flyovers in Atlanta will start at 1:35 p.m. (EDT) and last approximately 25 minutes.

Residents in these areas will be able to see the flyover from the safety of their home-quarantine and should maintain all social distancing guidelines during this event. They should also refrain from traveling to landmarks, hospitals and gathering in large groups to view the flyover. A detailed flight route will be released on the day prior to the flyover.