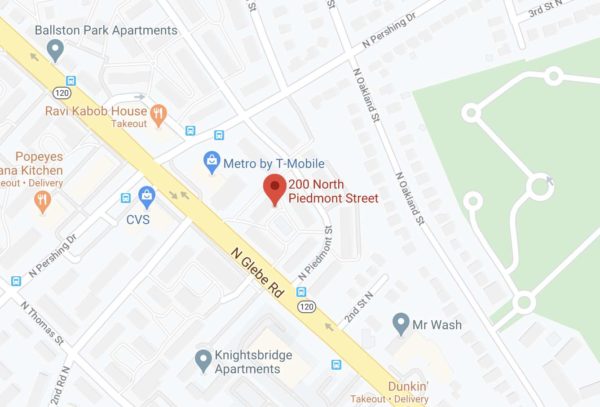 Update on 5/12/20 — In an update, Arlington County Police say a man has been charged in connection to this incident, which is still considered a “suspicious death.” From ACPD:

This incident remains classified as a suspicious death. Detectives continue to investigate the events that preceded the death and are working with the Office of the Chief Medical Examiner to determine cause.

Pursuant to our investigation, the condition of the body indicates the death occurred days prior to police being summoned to the residence. Roscoe James Shaw, 51, of Arlington, VA, has been arrested and charged with Virginia Code § 18.2-323.02 Concealment of Dead Body. He is being held without bond in the Arlington County Detention Facility.

The death was discovered following a police dispatch around 4:45 p.m. Friday.

Officers responded to the 200 block of N. Piedmont Street, which is primarily a collection of garden apartment buildings, “for the report of suspicious circumstances,” ACPD said in a press release.

The SWAT team was later called in to make entry into a residence. A tipster described a large police presence in the area.

“Any info on whatever is happening around N. Piedmont Street and Glebe,” the tipster asked around 9:15 p.m. “Fifteen plus cops, road shut down, full tactical gear.”

Upon entering the residence, police say they found a man dead inside.

The death is considered “suspicious” and is being investigated by homicide detectives and the medical examiner. If determined to be homicide, it would be the third homicide in the county so far this year. The last reported homicide happened on April 23.

More from the police press release:

At approximately 4:44 p.m. on May 8, police were dispatched to the 200 block of N. Piedmont Street for the report of suspicious circumstances. During the course of the investigation, information was developed about a possible deceased individual inside a residence. Officers established a perimeter, secured a search warrant and entry into the residence was made by members of the SWAT team. Once inside, an adult male was located deceased.

Cause of death will be determined by the Office of the Chief Medical Examiner. The identity of the decedent is being withheld pending proper identification and notification of next of kin.

This remains an active and ongoing criminal investigation. Anyone with information related to this case is asked to contact Detective S. King of the Arlington County Police Department’s Homicide/Robbery Unit at 703-228-4243 or [email protected] Information may also be provided anonymously through the Arlington County Crime Solvers hotline at ‪1-866-411-TIPS (8477).