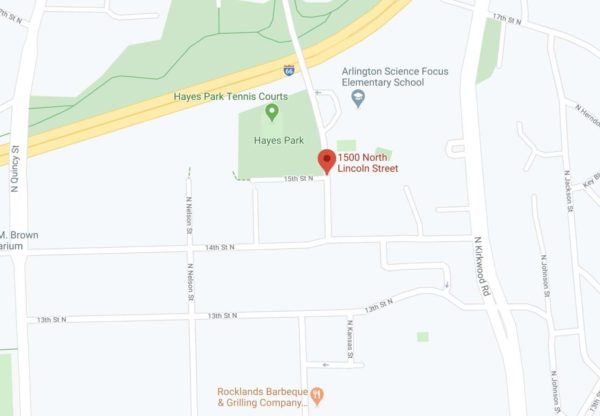 Arlington County Police are looking for a teenager accused of trying to rob a scooter rider in Virginia Square.

Police were dispatched to N. Lincoln Street, in the area of Arlington Science Focus School and Hayes Park, Monday afternoon for a reported robbery by force.

“Upon arrival, it was determined that at approximately 1:45 p.m., the victim was riding her scooter in the area when the suspect approached her and attempted to grab her backpack unsuccessfully,” ACPD said in a crime report. “The victim turned around and was struck by the suspect, but was able to run away and seek assistance. The victim sustained minor injuries.”

“The suspect is described as a skinny white male, approximately 15 years old, 5’3″, with curly brown hair, wearing a white t-shirt and blue jeans,” police said. “The investigation is ongoing.”

Also on Monday, a scuffle in Virginia Hospital Center left an officer with minor injuries and a 22-year-old man behind bars. More from a crime report:

ASSAULT & BATTERY ON POLICE, 2020-05110041, 1600 block of N. George Mason Drive. At approximately 10:37 a.m. on May 11, officers on scene at the hospital were attempting to restrain a subject who began acting disorderly. A brief struggle ensued, during which the suspect struck an officer with a closed fist. The officer sustained minor injuries. Daunte Butler, 22, of No Fixed Address, was arrested and charged with Assault and Battery on Law Enforcement. He was held on no bond.