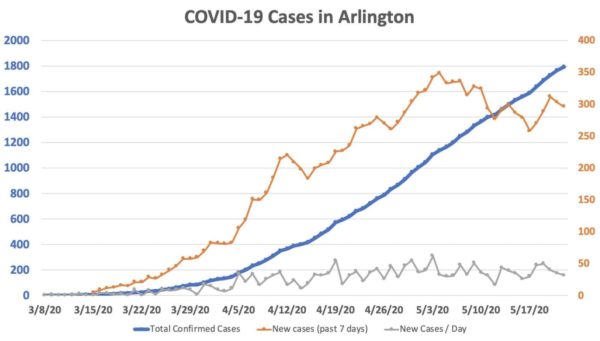 (Updated at 11:10 a.m.) Two of the key metrics to track the coronavirus epidemic in Arlington are pointing in the right direction, but only modestly so.

Both new cases and hospitalizations are down, following the release of Friday’s COVID-19 data by the Virginia Dept. of Health.

Arlington now has 1,795 reported cases, 346 hospitalizations and 91 deaths, according to VDH. That’s an increase of 32 cases and two deaths since Thursday. There were no new hospitalizations, though Arlington’s hospitalization data is full of periodic peaks and valleys. 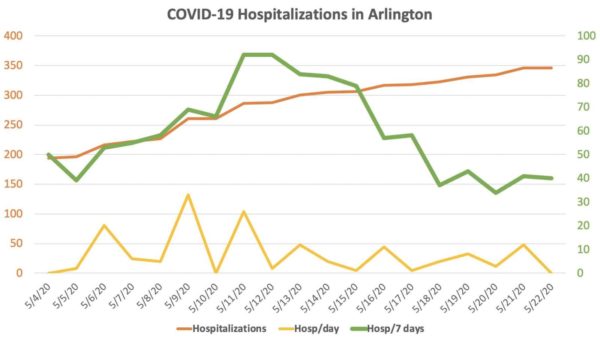 The new figures follow a downward trend in cases and hospitalizations, though the rate of decline in cases is relatively modest and the 7-day trailing hospitalization rate this week held mostly steady.

Testing, another metric that Arlington officials say is key to allowing the county to reopen, has shown little growth over the past two weeks, remaining steady around 150 PCR-based tests per day. 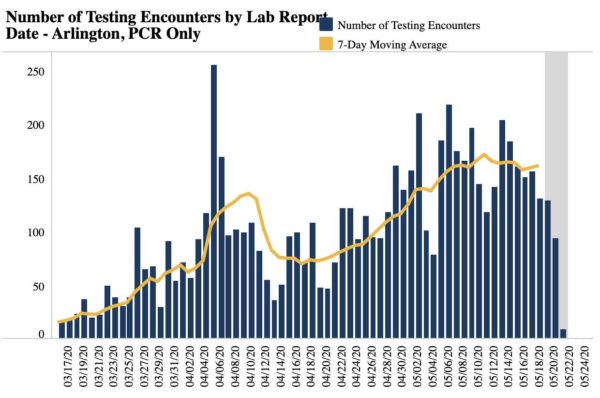 Across the Commonwealth, the picture is rosier, with the number of new daily cases continuing to fall, tests performed continuing to rise and the average test positivity rate now below 15%. In all, Virginia is reporting 34,950 cases, 4,145 hospitalizations, 1,136 deaths, and 223,433 PCR tests performed statewide.