As Arlington enters Phase Two of Governor Northam’s re-opening strategy, I have really struggled to empathize with my neighbors.

Despite the polarization and tribalism we see in debates that rage across social media and populate the headlines, I try to believe people are more nuanced and complex than the red and blue avatars we create for them. I refuse to concede the young couple walking their dog, or the woman on a run, or the family sitting out in their front yard during my evening walks, are as divided or as divisive as some would have us believe.

But we’re hardwired to sort ourselves into tribes, and political leaders and pundits often take advantage of our biology to drive their own agenda. It seems to have gotten to a fever-pitch.

The recent killings of Ahmaud Arbery, Breonna Taylor, and George Floyd reignited the conversation about race and policing practices in America and right here in Arlington. After more than a week of peaceful protests organized by community and religious groups — flanked by instances of rioting in other major American cities — we are seriously re-thinking our relationship with law enforcement in this country.

I marched from Courthouse to Clarendon and back at last Thursday’s peaceful protest, holding a sign that read #SayTheirNames along with the names of nearly a dozen black Americans who either died during an altercation with police or later in police custody. As someone who is passionate about criminal justice reform and works in the policy space, I recognize many of these tragedies are a product of overcriminalization and police practices.

There are evidence-based bipartisan solutions that can be implemented that guarantee human dignity and reduce the likelihood of adverse (or even deadly) interactions with police. Those in attendance at last Thursday’s march weren’t red Americans or blue Americans, they were the kinds of people who could come to the table and support bipartisan solutions.

But for as much faith as I have in people who are involved advancing solutions to the criminal justice problems we face, I am dragged kicking and screaming back into the debate about re-opening, where the battle lines are much clearer… and much more partisan. 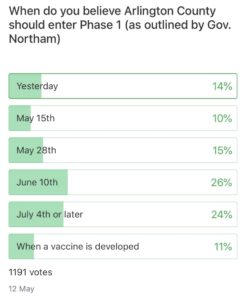 A question posed on May 12 on the community social networking site Nextdoor asked, “When do you believe Arlington County should enter Phase 1?” Of the nearly 1,200 respondents, more than 60% said either “June 10” (yesterday), “July 4 or later,” or “when a vaccine is developed.” I was baffled by this.

Part of the reasoning didn’t become clear to me until several weeks later when Arlington released its unemployment numbers from mid-March to mid-April. Arlington’s unemployment rate? 7%.

It’s easy to rationalize keeping the economy shuttered for an extended period of time when 93% of the workforce is still drawing a paycheck. Worst of all? The shutdowns disproportionately impact people of color at the lower end of the socioeconomic spectrum, moving economic security and the American Dream further out of reach.

Somewhere along the way, the tribalism kicked into high gear and people ascribed the worst intentions to others with whom they didn’t agree. People who wanted to re-open the economy simultaneously wanted to kill the vulnerable and immunocompromised, while people who favored keeping the economy closed wanted to drive us into a prolonged recession. Neither of these assertions is true.

And while the science changes on a daily (and sometimes hourly) basis, it seems efforts should have been pursued that protected the vulnerable and immunocompromised while allowing a significant percentage of the population to responsibly continue to work. There are countless unseen tragedies that persist when otherwise healthy people are driven to isolation and economic devastation.

Nowhere has this debate erupted more vigorously in Arlington than in the oft-touted “Arlington Neighbors Helping Each Other Through COVID-19” Facebook group, which was initially created to build community and help share information about resources for those who needed toilet paper and domestic supplies to those who needed financial or social support to make ends meet.

Again, I like to think my neighbors are more nuanced and complex than the red and blue avatars we create for each other, but the proliferation in recent weeks of scolding posts about businesses lawfully reopening per Governor Northam’s guidelines and people not wearing masks outside has dragged me back into my tribe.

The community-driven assault on one such business (it persists even as you read this) led County Board member Katie Cristol to publicly criticize and threaten that business with government action in a now-deleted tweet before retracting and apologizing for her comment. But where Cristol got it right — retracting and apologizing once the facts were known — hundreds of her constituents persist in getting it wrong.

A tool like the “Arlington Neighbors…” group should strengthen the infrastructure of community, not further sow divisiveness and tribalism. Its original intent is noble and has helped many people during these challenging times. The moderators and the commenters (myself included) should be better about seeing one another as human — as the young couple walking their dog, or the woman on a run, or the family sitting out in their front yard during my evening walks — rather than the red and blue avatars we create.

Matthew Hurtt is an 11-year Arlington resident who is passionate about localism and government transparency and accountability. Hurtt is a member of the Arlington Heights Civic Association and was previously the chairman of the Arlington Falls Church Young Republicans. Hurtt prides himself on his ability to bring people of diverse perspectives together to break down barriers that stand in the way of people realizing their potential. He is originally from outside Nashville.