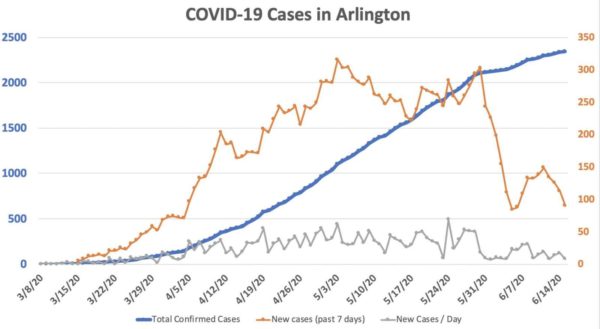 Arlington’s coronavirus data continues to look good, even while a resurgence of cases in the U.S. and China weighs on the stock market.

“The second wave has begun,” one medical school professor told CNBC today. But even while 22 states — mostly in the west and the Sun Belt — report an acceleration of new cases, Arlington and Virginia are looking to be in good shape, for now.

As of Monday morning, Arlington has reported a cumulative total of 2,346 cases, 405 hospitalizations and 125 deaths. The seven-day trailing total of new cases and hospitalizations now stands at 90 and 13 respectively.

Arlington and Northern Virginia entered “Phase 2” of the reopening on Friday, allowing restaurants and gyms to open indoor spaces for the first time since March.