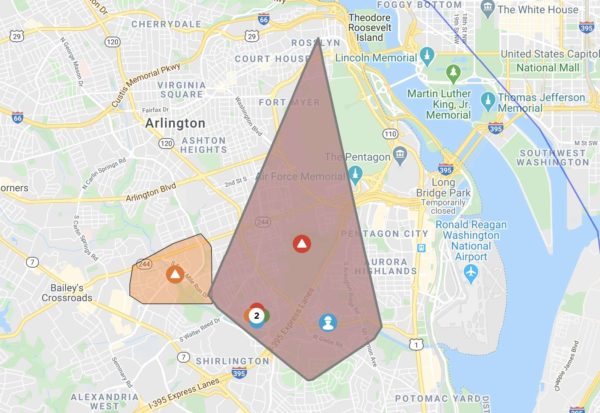 Update at 1:20 p.m. — “We have restored service to all customers,” says Dominion spokeswoman Peggy Fox. She said technicians are still trying to determine the cause of the outage.

Update at 11:55 a.m. — There are now just short of 5,700 without power in Arlington, mostly along and south of Columbia Pike. Numerous traffic signals in the Green Valley and Shirlington areas are dark.

Earlier: Nearly 8,000 Dominion customers are currently without electricity in Arlington, according to the power company’s website.

The widespread outage extends from the Shirlington area as far north as Rosslyn, according to a Dominion map. The reason for the outage is only listed as “circuit out.” Police are responding to help direct traffic on the county’s western end of Columbia Pike, where traffic signals are dark.

Nearly 600 Dominion customers are also said to be without power in Alexandria.