This piece was co-written by Gillian Burgess.

Next month, the Arlington County Board will approve its Capital Improvement Plan (or CIP) after a truncated process. This critical component of Arlington’s budget outlines the investment that the county will make in infrastructure in the future.

Unfortunately, the County Manager’s proposed CIP budget is setting us up to perpetuate inequities in our infrastructure investments at a time when we should be responding to a crisis by pursuing equity.

The typical CIP budget process involves months of community input. It also typically projects out the investments that the county will make over the next 10 years. This long-term planning is essential for infrastructure projects that will serve residents across the county for many years to come. It is so time-consuming that it typically only happens every other year. The last CIP was adopted in 2018.

However, under the shadow of the COVID-19 pandemic, County Manager Mark Schwartz has proposed a budget with only one year of investments, with a promise to come back next year with a longer-term (4-6 years) investments. Mr. Schwartz said he was guided by five principles in these making the county’s investments:

The first five categories can be described as “needs and requirements,” but the sixth is the only new investment the county is considering. Funding for the projects come from many sources: grants, specific fees, real estate taxes (through the annual operating budget) and bonds, which the public votes on in November. Many of those sources are restricted in what they can be used for, such as grants for transportation projects.

The Manager’s Proposal leaves new projects that we typically see in the CIP — everything from parks to bike lanes — unfunded and delayed for at least a year. This year, the Manager is recommending a bond referendum of $51 million to fund the first round of stormwater projects. If approved, this would be the first time a bond was issued specifically for stormwater infrastructure (previously, stormwater had been funded by the stormwater tax and utilities bonds). 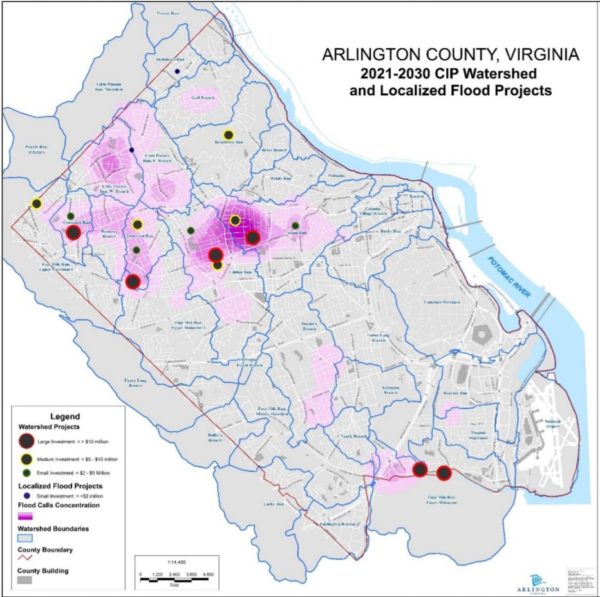 Arlington began seriously looking at funding and implementing the 2014 stormwater plan after a series of floods in 2018 impacted neighborhoods scattered across Arlington. The unprecedented flash flooding event on July 8, 2019, caused serious damage that was well documented. Stormwater improvements will benefit these neighborhoods.

However, the map of flood calls and areas of investment shows that the County is asking all residents to support a multi-million dollar infrastructure project to protect houses most of us can’t afford. Fixing our aging and inadequate stormwater infrastructure is an important responsibility. But it must be balanced with the other responsibilities of the county, such as providing good quality, equitable transportation infrastructure, parks, and schools.

The Manager’s proposal is to entirely fund the stormwater plan over 10 years. None of the County’s other 10 Comprehensive Plans receive this level of commitment. In comparison, the County also has master plans for transportation and community energy, for which there is no commitment to fund over any time period. In fact, the proposed CIP makes little to no progress on implementing those plans.

Moreover, while the proposed CIP includes only $14.6 million in stormwater projects next year, it would ask voters to fund $50 million in stormwater bonds — which would cost the county $500,000 in debt service every year. The Manager’s proposal does not explain why the bond funding is so high. Arlington County strives to maintain its excellent credit rating, which effectively puts a cap on total bond funding. By proposing such a large bond for stormwater, the Manager is effectively limiting potential bond funding for schools, transportation, parks, or other county responsibilities.

Instead of plunging ahead with accelerated funding for stormwater, Arlington should fund a balance of its priorities, including an assessment of the impact of each investment on the different communities of our county. If we can implement a stormwater plan that primarily benefits North Arlington homeowners in 10 years, we can implement transit, bike, and walking- focused transportation plans that benefit our neighbors who don’t have cars in a similar time period. If we can make investments in stormwater during the pandemic, we can make progress toward our carbon-neutral goal. If the pandemic makes our future uncertain, we should not be issuing bonds that far exceed the amount of funding we need for the current year.

Additionally, Arlington should address stormwater through smart growth development in flood-prone areas. We should allow developers to create new walkable, mixed-use neighborhoods using modern stormwater management techniques, rather than just increase our stock of million-dollar homes. Despite what some people claim, the largest increase of impervious surface comes from the redevelopment of older detached homes in single-family neighborhoods. Arlington’s analysis shows that “from 2007-2017, overall imperviousness in Arlington County increased from 41.1% to 42.9% (or about 3.6%), with the majority of this increase (60%) coming from single-family redevelopment.”

Apartment buildings accounted for only 6%.

Many new apartment buildings are actually built in place of parking lots. Multi-family properties are required to include stormwater mitigation as part of their site plan development. The Apex development along Four Mile Run and S. Glebe Road created 256 committed affordable apartments while decreasing impervious service by 2,000 sq. ft. and reducing run-off by 80%.

The pandemic and emerging economic recession are going to force tough choices on the County Board. And in light of the current crisis, we can find more equitable ways to invest $51 million.

The FY 2021 CIP asks Arlingtonians to prop up a pattern of development that is more taxing on our planet — heating and cooling larger homes, pushing more people further from their jobs, increasing car trips, and ultimately exacerbating climate change. Let’s fight flooding with smart growth development and use our public resources to invest in equity.

The County Board will hold a Public Hearing on the CIP on June 30. The bond referenda will be on the ballot in November.

Jane Fiegen Green, an Arlington resident since 2015, proudly rents an apartment in Pentagon City with her family. By day, she is the Membership Director for Food and Water Watch and by night she tries to navigate the Arlington Way. Opinions here are her own.