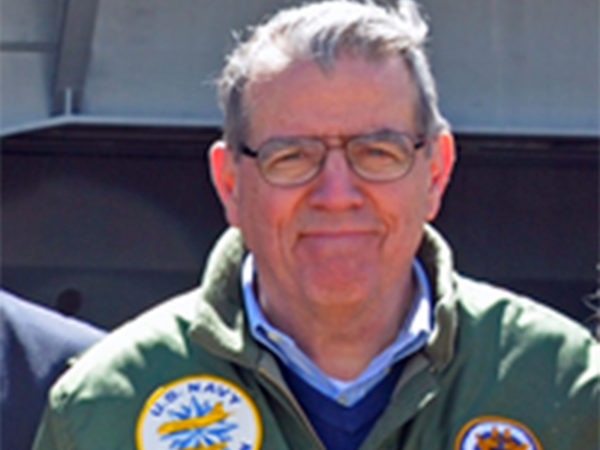 A Navy veteran, Pebley was best known recently for his close involvement in the festivities around the naming of the USS Arlington. We interviewed him about that and other community issues in 2018.

Pebley was an early booster of ARLnow, providing advice and patiently explaining some of the ins-and-outs of how the county works in our first few months. We greatly appreciate his support, encouragement and wise counsel.

Kevin Reardon and former County Treasurer Frank O’Leary, who both worked with Pebley on the USS Arlington Community Alliance, penned the following obituary for their friend.

Jim Pebley passed away Tuesday afternoon, June 23rd in Wake Forest, North Carolina, after a heroic twenty-month battle with cancer. He was 69 years old. Commander James Pebley, USN completed his naval service while stationed at the Pentagon in the late 1980’s. He and his wife Cecile, also a retired naval commander, decided to reside in Arlington on 16th Street North. Jim immediately transferred his oath of service to his “Country” to service to his “County.”

Over the ensuing more than quarter century, Jim’s activities ranged from addressing the needs of Reagan National Airport, highway safety, ensuring pure drinking water, and innumerable other projects, including commissions such as: County Fiscal Affairs, Emergency Preparedness, and County Planning. He may have been best known for his involvement in “Backyards Not Barnyards,” a group that successfully fought off efforts to loosen restrictions on chicken-raising in Arlington.

Most importantly, he was a driving force in expressing citizen concerns and seeing that they were addressed by the County government. Jim, perhaps more than any other Arlingtonian, embodied and furthered the ideals and  goals of the Arlington Civic Federation.

Politically, Jim was a loyal member of the Arlington County Republican Committee. His dedication to the well-being of Arlington County, however, transcended party politics. Jim never served as an elected official, but when he called upon elected officials, they listened attentively to what he had to say and often followed his advice. In 2017, he was honored by the County Board for his services in a public session.

In 2012, Jim was asked by the Navy League to Chair the local Commissioning Committee for the USS ARLINGTON. Our County’s namesake ship was being created to honor those who died at the Pentagon on 9-11 and those who so courageously responded to the crisis. (A girder from the Pentagon was incorporated into the ship’s keel.) Under Jim’s inspired leadership, our committee raised $438,000, far exceeding the needs of the Navy League. The excess funds were used primarily to create a “Tribute Room,” a small museum behind the bridge of the ship, reflecting the events at the Pentagon on 9-11. Since 2013, this very special room, unique to our ship, has been visited by guests at many ports of call and proclaims Arlington’s story to the world.

In 2013, Jim asked a number of us on the Committee to join with him in creating the USS ARLINGTON Community Alliance to maintain a continuing relationship between our community — our ship — its captain – and its crew.  Since then we have built bridges between Arlington’s schools and our ship and hosted an annual 9-11 event (the ship’s schedule permitting) at Firehouse 5 where the public is invited to meet, greet, and have lunch with those who so honorably represent our community, while serving on our ship. Despite his moving to North Carolina in 2017 and his ensuing illness, Jim remained very active in all of this.

As a measure of his dedication, two weeks ago, Jim provided a generous contribution of $10,000 to the Arlington Historical Society to provide for the installation of a model of the USS ARLINGTON in the atrium of the Ellen M. Bozman Government Center, the site of our local government. (Those who wish to honor Jim’s memory may send their contribution to: The Arlington Historical Society, 9-11 Fund, P.O. Box 100402, Arlington, Virginia 22210-3402.)

There is so much more to say about Jim. He was wise, eternally positive and optimistic, charismatic, and extraordinarily generous both financially and in spirit. He was a great leader who always assumed responsibility for any mishap that might arise — even when it was not truly his fault. He never once complained about his illness or the excruciating pain it imposed. He fought the good fight to the end and we who knew and loved him will greatly miss him.

Jim had two final wishes. First, given the Coronavirus and the threat it poses at public gatherings, he wanted no memorial service. Second, he requested that his ashes be scattered at sea by the US Navy. Both these wishes will be granted. BRAVO ZULU! Commander – well done – and Godspeed.