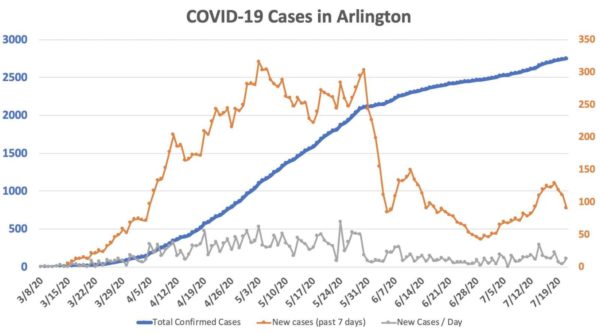 A 2-3 week rise in new coronavirus cases in Arlington appears to be abating, for now.

The county’s seven-day trailing rate of new cases is back down into the double digits for the first time in a week. It now stands at 90, after topping out at 129 on Saturday — two weeks after the Fourth of July.

The cumulative total of confirmed cases in Arlington now stands at 2,750, while there have been 431 cumulative hospitalizations, according to the latest Virginia Dept. of Health data.

In response to an inquiry from ARLnow last week, Arlington Public Health Director Dr. Reuben Varghese said the county was not seeing enough evidence to link holiday travel to rising cases. He instead emphasized that Arlington residents should take precautions — staying at home if possible, wearing masks and physically distancing when out — wherever they are.

“People need to recognize that most of the U.S., if not all of the U.S., has community spread,” Varghese said. 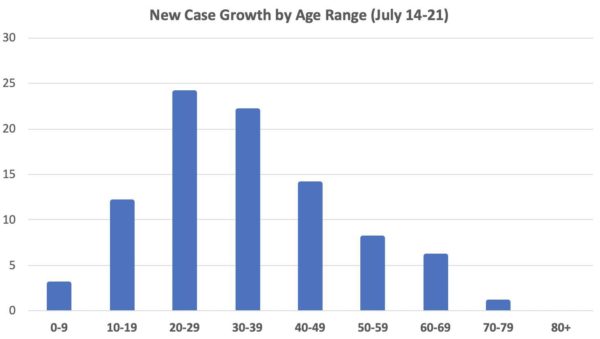 New cases in Arlington continued to skew toward younger adults. Over the past week, more than half of new cases are among those ages 20-39. By comparison, only one new case has been reported among those ages 70 and up.

D.C.’s health director has attributed a rise in cases in the District to, according to DCist, “slacking off when it comes to following guidance for social distancing, wearing masks, and only venturing out for essential activities.” Some have wondered whether weekend bar-going crowds in Clarendon contributed to the rise here, though so far local health officials have not singled it — or any other activity — out as a significant factor.

Clarendon: bringing the worst out of young people since 1998.@ARLnowDOTcom @ArlingtonVA pic.twitter.com/GbM33yUf1O