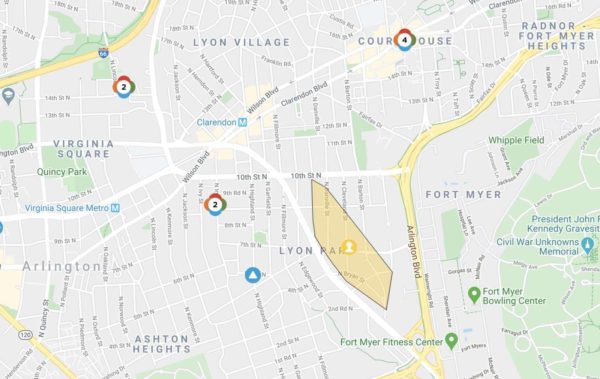 More than 1,000 Dominion customers are still without power following a round of strong storms Wednesday afternoon.

At the peak of the post-storm outages, the company reported more than 10,000 customers in the dark in Arlington County. As of 11:45 a.m. Thursday, that figure was down to 1,070. The outages are scattered throughout the county, with some concentrated in certain neighborhoods.

On its website, Dominion estimates that power will not be restored to all Arlington customers until 11 p.m. tonight. The company said that more than 52,000 lost electricity in Northern Virginia due to the storms, creating a backlog for power crews.

Among those still affected are Courthouse pub Ireland’s Four Courts and hundreds of residents of Lyon Park and Ashton Heights, where a large tree fell on power lines.

.@kcristol .@Matt4Arlington .@ArlingtonVaPD Any idea when the power will come back on in courthouse? The business on the 2050 strip have had no power since 3.30 yesterday . Lost dinner and lunch already ……#2020worstyear

@DominionEnergy @PeggyDomEnergy still absent at corner of 9th Rd N & Irving. Instead of bot-asking for PM (already provided that info), please don't delay this til tomorrow. I'll hold up some lights if you want… (100s of houses affected by this…) @ARLnowDOTcom @ClarendonBros pic.twitter.com/3YCtSvecJ7

Dominion is not the only utility company experiencing service outages in Arlington. Comcast is also reportedly working to restore service to customers throughout the county.

While not on par with Wednesday’s storms, another round of thunderstorms are likely later today. The National Weather Service cautions that damaging winds and localized flooding are possible.

END_OF_DOCUMENT_TOKEN_TO_BE_REPLACED

More Stories
WETA Expansion Gets Green Light from County BoardStatutes of Liberty: There’s No Public Defender — Where to Go If You Can’t Afford an Immigration Lawyer