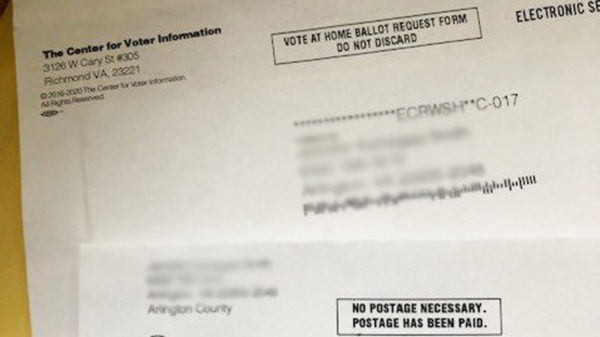 Earlier this week, thousands of Arlington residents received a mailing from the “Center for Voter Information” with a prepaid “vote from home ballot request form” enclosed.

Intended to make it easier for local residents to vote by mail during the pandemic, the mailing has instead led to mass confusion.

Much of the confusion locally can be traced to an error with the absentee ballot applications sent to 450,000 Fairfax County residents. The return mailing address for the application is, erroneously, that of the City of Fairfax, not Fairfax County.

There have also apparently been problems with mailings sent to other localities by the same get-out-the-vote nonprofit, leading the Virginia Dept. of Elections to issue a press release about it yesterday.

Despite that, the press release notes that “any applications that arrive in the wrong locality’s office will be forwarded immediately to the correct office for processing.” The Center for Voter Information, for its part, says it’s working to fix the problems.

But with heightened concerns about funny business around the 2020 election, some who received the mailings are now under the false impression that they’re “fraudulent.”

“Have you guys come across the letters from the ‘Center for Voter Information?'” wrote one of numerous tipsters that have reached out to ARLnow. “There’s a vote by mail application form within, and they require a SS# to vote by mail (I’m already registered) and a return envelope to the Arlington County Registrar. Sketchy to say the least.”

“My wife received the same scam mail as shown in the article below,” another tipster said, linking to a Fairfax County press release. “I thought it may be of interest.”

Arlington County, meanwhile, issued its own press release Thursday (below), clarifying that the mailing sent to Arlington residents is not a scam and appears to contain correct information.

This week, many voters received pre-filled mail ballot applications from the Center for Voter Information. This is an independent organization not affiliated with the Arlington County Office of Voter Registration & Elections.

The form is the correct Virginia Vote by Mail Application for Arlington and can be used by voters to request a ballot for the Nov. 3 General Election. Voters can fold the application and return it in the provided envelope. It will be delivered directly to the Arlington County Office of Voter Registration & Elections for processing.

While there are reports of inaccurate information in other Virginia localities the ones provided to Arlington voters appear correct. The Center for Voter Information uses publicly available data sources.

Voters are encouraged to check their voter registration record online at vote.elections.virginia.gov. Voters who have submitted a request for a mail ballot in November do not need to submit another request. Ballots will be sent the week of Sept. 18.

Go to vote.arlingtonva.us to learn more about voting options for the November election.

If you have any questions, contact the Office of Voter Registration & Elections at [email protected] or by phone at 703-228-3456.

To be extra safe, voters should verify the pre-filled information in the Center for Voter Information mailer before sending it in, or should simply apply for an absentee ballot directly on the state website.