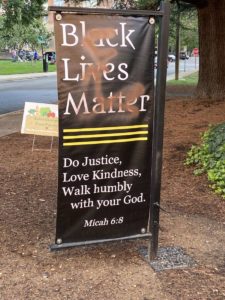 For at least the third time over the past two months, someone has vandalized a racial justice sign outside of an Arlington church.

The latest sign defacement happened outside of St. George’s Episcopal Church, at 915 N. Oakland Street in Virginia Square. Someone spray painted over a sign with a Bible verse and the words “Black Lives Matter.”

“At approximately 1:07 p.m. on August 10, police were dispatched to the report of graffiti which had occurred approximately 20 minutes prior,” ACPD spokeswoman Ashley Savage tells ARLnow.

“Upon arrival, it was determined that an unknown suspect spray painted over the words ‘Black Lives Matter’ on a sign,” Savage continued. “The suspect is described as an Asian male, between 50-65 years of age. He was wearing a red hat, glasses, plaid shirt, blue jean shorts and used a power wheelchair. The investigation is ongoing.”

On a local Facebook group, the church’s music minister said the vandalism was caught on video.

“We have video of this happening and the police have it,” he said. “Most importantly, we have extra signs. Please pray that love will rule our hearts. God bless you all.”

Another post, from this morning, says that the sign was vandalized again — someone put a sticker with the words “hate crimes are funny” over the word “Black.”