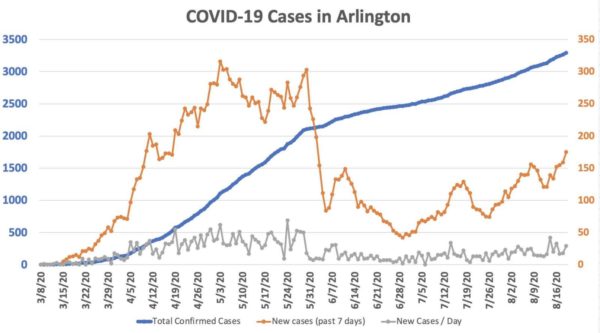 (Updated at 11 a.m.) Arlington has reached a new high water mark for coronavirus cases this summer.

The county recorded 175 new COVID-19 cases over the past seven days — an average of 25 per day — according to new Virginia Dept. of Health data. Twenty-nine new cases were reported overnight.

The seven-day trailing total of new cases peaked in early May at 316, during the height of the local epidemic. It bottomed out at 42 in late June, and reached a previous summertime peak of 156 on Aug. 8.

Arlington’s test positivity rate has also been increasing. It currently stands at 5.3% — above the county’s 3.7% positivity rate two weeks ago but below the current statewide average of 6.7%. More than 400 PCR-based tests are being performed daily in Arlington, on average.

There is a common thread among those testing positive: they’re typically younger. According to VDH data, analyzed by ARLnow, fully 70% of new cases in Arlington over the past month are among those below the age of 40. 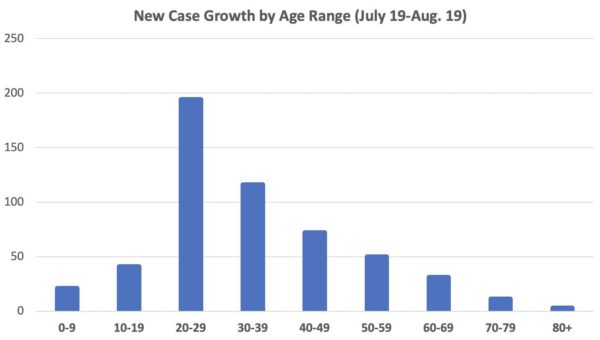 Asked last week whether the county’s contact tracing efforts have revealed anything about where people are getting infected, an Arlington Public Health spokesman said no notable trends have emerged.

“There is no evidence of a specific source or location that has put people at risk of infection more than others,” said Ryan Hudson. “Not being able to identify a single source, or a few sources, is the definition of community spread.”

In D.C., however, officials have revealed more information.

The District’s health director said Monday that indoor restaurants are sources of spread, but travel, social gatherings and the workplace are even bigger sources of infection.

DC DOH Director LaQuandra Nesbitt says indoor dining is high risk, but that a higher proportion of cases are attributed to travel and the workplace. She says social events and travel are the things she's most concerned about.

Arlington County Board Chair Libby Garvey appeared to provide some additional information on local sources of spread during a chamber of commerce event this week, pointing the finger at restaurants and family gatherings.

The number of new daily coronavirus cases in the region has fallen significantly since reaching a peak in late May, but a recent uptick, particularly associated with bars, restaurants and family gatherings, may require tightening some restrictions, said Libby Garvey, chair of the Arlington County Board.

In a Washington Post article, Garvey is more specific.

“The stubborn increase in Arlington is driven in large part by young adults who have not been using masks or maintaining their distance inside bars and restaurants, particularly in the trendy Clarendon and Rosslyn neighborhoods, said Libby Garvey,” the Post reported.

The restrictions Garvey is considering, according to the Post, “include a curfew in some areas. Or, if the situation worsens, bars and restaurants may need to be shut down.”

“I don’t know that we should keep our schools closed in order to keep our bars and restaurants opened,” Garvey is quoted as saying.

While the younger people who are disproportionately contracting COVID-19 are at lower risk for serious complications than those who are older, there are growing concerns about the long-term implications of the disease, even among those with relatively minor symptoms.

A recent study of 60 COVID-19 patients published in the peer-reviewed medical journal Lancet this month found that 55% of patients in one study were still displaying neurological symptoms during follow-up visits three months later, including confusion and difficulty concentrating, as well as headaches, loss of taste and/or smell, mood changes and insomnia.