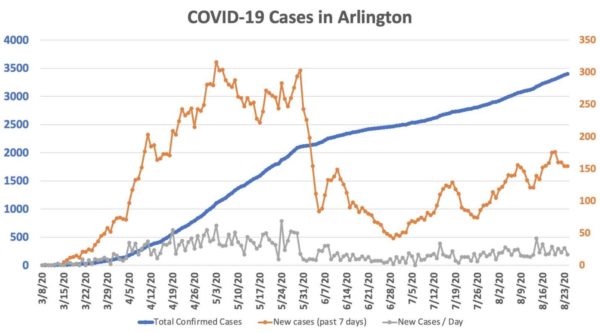 Over the past seven days 154 new cases have been recorded in Arlington, compared to 176 as of Thursday — the highest point since the spring epidemic, which abated in late May and was followed by a sustained dip in cases that started to reverse around the beginning of July.

Two months ago, on June 24, the seven-day trailing total of cases was 66.

A total of 3,400 confirmed cases have been reported in Arlington County since the start of the epidemic in March, according to Virginia Dept. of Health data.

Only one new COVID-related hospitalization was reported over the weekend, bringing the seven-day total to 12 and the cumulative total to 449.

No new COVID deaths have been reported since Thursday. The total currently stands at 137.

Arlington’s test positivity rate has held relatively steady recently and currently stands at 5.4%. The statewide average continues to fall and is now 6.4%.

Virginia’s Commissioner of Health said last week that he would mandate coronavirus vaccinations for state residents, once one is proven safe and effective.