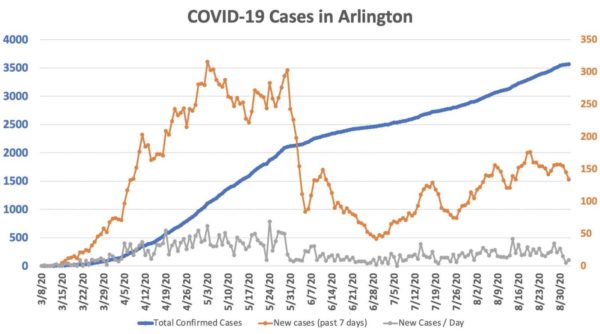 The rate of new coronavirus cases in Arlington has dropped over the past few days, but four COVID-related deaths have been reported this week.

The Virginia Dept. of Health reported only nine new cases in Arlington overnight, five new cases the day before that, and 15 new cases two days ago — all below the seven-day moving average.

Despite that good news, there is some bad news: another coronavirus death was reported overnight, the fourth such death reported by VDH over the past three days. Arlington’s cumulative total now stands at 141. Prior to Monday, the death toll had only risen by four over the course of more than 50 days.

What might be behind the recent drop in cases?

It’s entirely possible it’s just a normal fluctuation, as the numbers have bounced up and down for months. It’s also possible that the return of students to college campus could be a partial explanation.

A student from Arlington who contracts the disease while at college elsewhere would most likely not be included in Arlington’s numbers, according to county health officials.

That could have a noticeable impact on Arlington’s numbers — since the Phase 3 reopening on July 1, which allowed more people to crowd in to bars and restaurants, a preponderance of cases in Arlington have been among those in the 18-29 age range.

But the return to campuses may be short lived: James Madison University students, for instance, are returning home after an outbreak on campus led to more than 500 active COVID-19 cases.