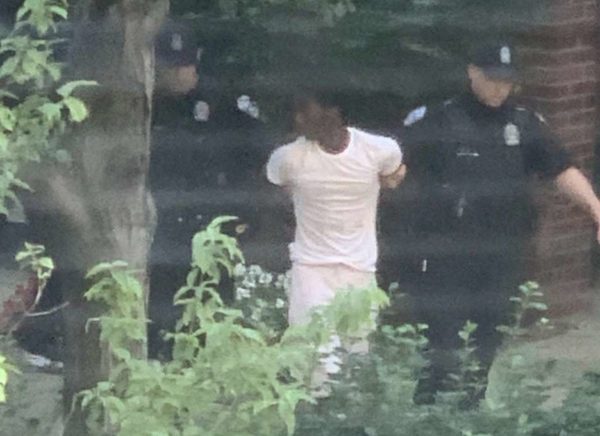 An 18-year-old Arlington man was arrested Tuesday morning after a brief foot chase through Virginia Square.

Police say they were initially called after a man allegedly spit on an employee inside a business on the 3500 block of Wilson Blvd. That block includes a 7-Eleven store, but the Arlington County Police Department typically does not name the business in which a crime occurs.

After officers spotted the suspect near N. Oakland Street and tried to place him in handcuffs, he took off on foot, according to ACPD. He was ultimately taken into custody at gunpoint in front of the Brookdale Arlington assisted living facility at 3821 Wilson Blvd, according to photos and scanner traffic at the time.

The man — who was wanted in Montgomery County, Maryland — is now facing numerous charges. More from an ACPD crime report:

OBSTRUCTION OF JUSTICE (Significant), 2020-09080057, 3500 block of Wilson Boulevard. At approximately 10:45 a.m. on September 8, police were dispatched to the report of a disorderly subject who had allegedly spit on an employee of a business. Arriving officers located a subject matching the description in the area of N. Oakland Street and 7th Street N. and made contact with him. The suspect provided officers with a false name, and, while attempting to identify him using law enforcement resources, he was determined to be wanted out of Montgomery County. As officers attempted to place him in handcuffs, he fled on foot. Following a brief foot pursuit, the suspect was taken into custody. Andre Hicks, 18, of Arlington, Va., was arrested and charged with Obstruction of Justice, Identity Theft, Assault & Battery, and Fugitive from Justice.