A grieving mother in Arlington turned her pain into a passion of raising awareness for pediatric cancer while contributing to a fundraiser for research.

Michele Fleming lost her son, Nathan, to cancer a week after his 18th birthday last September.

“Nathan was unbelievably strong, never wanting to reveal his pain or be defined by his cancer. He remained positive and a joy to be around throughout his struggle,” Fleming said about her son’s battle with cancer. “Nathan’s resilience, compassion and fierce determination to fight and overcome, motivates me everyday to do what I can to help other kids and their families win their battle with Nathan by my side.”

Since losing Nathan, Fleming has partnered with Alex’s Lemonade Stand Foundation and 1,641 other fundraising teams to host the foundation’s “Million Mile” event that raises awareness and provides funds to researchers for pediatric cancer cures.

The collective goal for this month-long event is to log one-million miles from virtual races and raise $1 million for the organization’s childhood cancer research fund.al

“Turn awareness into action, by joining The Million Mile, the largest childhood cancer awareness challenge that funds researchers so they can find better treatments and more cures for kids battling cancer,” the website said.

“Nathan’s Cancer Slayers” is ranked #3 out of 1,641 teams, with a goal of contributing $50,000 to the foundation’s research fund, according to Fleming.

Although they have not quite hit their goal yet, Fleming said she is thrilled with the amount of support the team is receiving.

“So far, we’ve raised an amazing $44,789, which will fund 896 hours of critical research! We’re blown away by all the support and I know that Nathan is cheering us on” said Fleming.

Numerous local businesses have contributed to the fundraiser, despite the pandemic hurting the finances of many.

“Arlington’s Arrowine, Harris Teeter, Pastries by Randolph, Lyon Hall, Massage Envy, Pupatella, Cook Architecture, Andre Chreky Salon Spa, and Taqueria El Poblano,” have all donated gift certificates or directly to the fundraiser, Fleming said. The Starbucks at the Lee Heights Shopping Center and Capital Laser & Skin Care in Bethesda also donated, and Pie-Tanza is donating 10% of its sales every Tuesday during the month, she added.

“We’re overwhelmed by all the support from the community,” said Fleming.

Additional donations can be made all month long by joining Nathan’s team. The donations are being matched by Volvo from Sept. 24-27, according to Fleming. 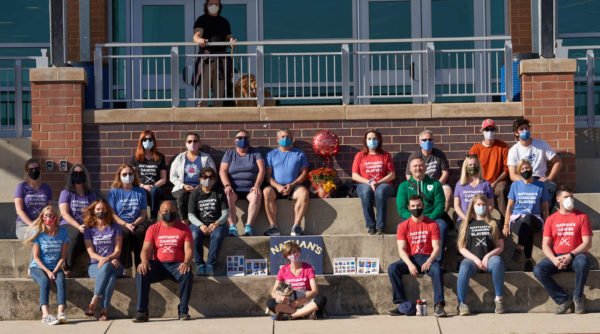