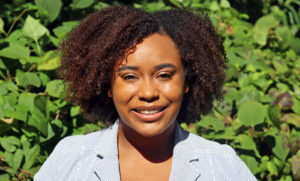 At five, I cast my first ballot for president, during an elementary school mock election.

In that moment, I felt I was making change, but that feeling was fleeting. I soon learned a hopeful child’s voice did not matter, and voting is a privilege. Frustrated, I vowed that at 18, I would exercise this privilege.

Seven years later, in 2008, I witnessed the world change as I watched the votes tally in favor of the first Black president. Being a young Black girl in Atlanta, I prayed my voice would matter someday. On my eighteenth birthday, keeping my childhood promise, I registered to vote.  Despite being excited and empowered, I was consumed with worry as I walked up to cast my first ballot. “Did I have my driver’s license?” Because without it, I could not vote.

Now, with the October 13 voter registration deadline approaching for the 2020 election, we must ensure every voter knows they matter. We must resist voter suppression tactics and register all eligible citizens. We must empower voters regardless of race, ethnicity, gender identity and sexual orientation to be the change they want to see in the world.

In July, there were only 434 net new registrations, in Arlington, compared to the 1,645 net new registrations in 2016. The pandemic’s reduction of person-to-person interaction is partially to blame. However, some Arlingtonians remain unregistered due to the limitations of Virginia’s Online Voter Registration (OVR) system. These eligible citizens may not have access to the internet, possess a Virginia identification card, or simply are new to the area.

That’s why I and many others spent many hot summer Saturdays, standing in front of places like the Arlington Food Assistance Center (AFAC), Shirlington Library Plaza or Penrose Square on Columbia Pike, registering voters (with our faces covered) hoping to encourage community members to join the electorate. Our efforts to help close the gap paid off and, in August, we saw 1,300+ net new registrations in Arlington, keeping pace with the upward trend in Virginia.

Our guiding principle is every person registered is a new voice being heard. A quick glance at history reminds us of the struggles we endured to obtain the privilege of voting and why we must keep fighting the good fight.

Power of Voting, Bad and Good

Voting is righteous, giving power to the few while silencing the many. The Constitution and/or various state laws originally excluded enslaved Black people, women and non-land-owning men, for instance.

Over time Americans have fought to end the sole representation of wealthy, White men. First, with the removal of the land requirement, then gaining rights for Black men, and finally for women. However, state laws were used to disenfranchise millions through poll taxes, literacy tests, and intimidation tactics.

Within a year of Shelby County v. Holder, Virginia passed SB 1256, requiring a Voter ID when voting. Although this law seemed neutral, it strategically disadvantaged low-income individuals. The law stated that you must provide a state-issued ID to vote, in effect creating a modern-day poll tax and completely leaving behind those without a permanent address. Fortunately the photo ID provision was repealed in April 2020 by the Virginia General Assembly, and signed into law by Gov. Ralph Northam (D). Repealing the voter ID laws is one step forward in ensuring voter rights in Virginia, however, the fight continues to fully restore the rights for those with felonies.

Despite such barriers, I hold on to what I call Voter Moments. It’s the moment of obligation and pride I felt at 18, when I registered and cast my first ballot. The moment a 50-year-old Black woman found out her rights were restored and she could vote. The moment a Latina cheered, “Votar es muy importante,” as her daughter registered for the first time. The moment a newly naturalized Muslim-American citizen realized he can vote. It is a moment that citizens are entitled to.

In these final days before a critical election, we must encourage more people to register, so we can truly say, “every voice matters.”

Maya Jones lives in the North Highlands neighborhood close to Lee Highway. She has spent many hours to ensure more people who are eligible to vote get registered and exercise their rights.