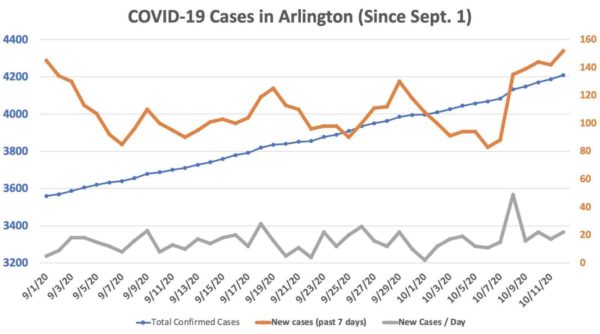 (Updated at 12:10 p.m.) The rate of new coronavirus cases in Arlington has reached the highest point since August.

Twenty-two new cases were reported in the county on Monday, bringing Arlington’s seven-day moving average of new daily cases to 21.7. That’s the highest point since Aug. 31.

Despite the recent rise in cases, it has been a week since the last COVID-related death was reported in the county. The seven-day rate of new hospitalizations currently stands at four, remaining in the single digits since mid-September. And Arlington’s current test positivity rate is a relatively low 3.3%, the same as it was last Thursday.

Arlington’s cumulative total of cases, hospitalizations and deaths is 4,209, 511 and 152, respectively.

As of Monday the test positivity rates in neighboring Fairfax County and the City of Alexandria hit new lows, of 3.6% and 3.7% respectively, according to InsideNova. After a bump in new cases statewide last week, the trend moderated a bit on Sunday and Monday, the site reported.

There has been a multi-day downward trend in coronavirus cases across the U.S., but rising levels in the Midwest. In Europe, meanwhile, a “second wave” of the virus has prompted new restrictions.