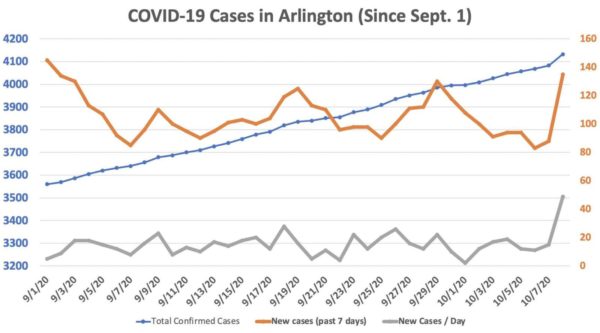 (Updated at 10:45 a.m.) Nearly 50 new coronavirus cases were reported in Arlington overnight, the biggest one-day spike for the county since late May, although part of the spike may be attributable to a reporting issue.

This morning the Virginia Dept. of Health reported 49 new cases in Arlington, bringing the county’s cumulative total to 4,132 and the trailing seven-day average of new daily cases to 19.3 from 12.6 yesterday. The last time the daily average was higher was Sept. 1.

October had thus far been relatively uneventful in Arlington, with the trailing seven-day average of new daily COVID-19 infections here staying below 16 — until today.

Statewide numbers also jumped this morning, with 1,844 new reported cases in Virginia, the second-highest spike since the beginning of the pandemic.

As of publication time, the state health department had not indicated, as it sometimes does, that there was a reporting issue that might account for the anomalous jump in cases. After the publication of this article, a note was added to the VDH website.

“Today’s case count includes 689 cases that should have been reported on Wednesday, October 7, but were excluded,” the note said. “A reminder: cases are not reported on the day the patient became ill, but on the day they have been classified as meeting the case definition for COVID-19.” 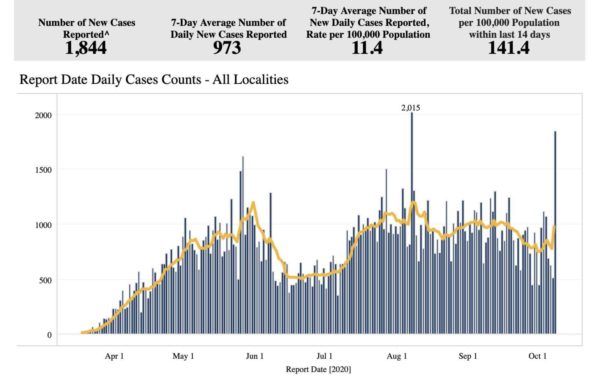 The test positivity rate in Arlington has risen slightly in the past few days and now stands at 3.3%, which is still considered to be relatively low.

Arlington’s health department, meanwhile, has joined D.C. and other local jurisdictions in urging anyone who has worked in the White House recently, attended the Supreme Court nominee announcement at the White House, or who has had recent contact with any of the previous two groups of people, to contact public health officials.

“Given the growing numbers of positive COVID cases reported from staff working in and near the White House, people who attended the event hosted by the White House on Saturday, September 26, 2020, and our preliminary understanding that there has been limited contact tracing performed to date, there may be other staff and residents at risk for exposure to COVID positive individuals,” said a jointly-signed letter from nine local health departments.

Cases in the District increased more than 25% last week, amid the outbreak at the White House.