Sponsored by Monday Properties and written by ARLnow, Startup Monday is a weekly column that profiles Arlington-based startups, founders, and other local technology news. Monday Properties is proudly featuring Shirlington Gateway. The new 2800 Shirlington recently delivered a brand-new lobby and upgraded fitness center. Experience a prime location and enjoy being steps from Shirlington Village. Spec suites with bright open plans and modern finishes are under construction and will deliver soon!

Finding a relationship during the pandemic has gotten a little easier.

George Mason University students Cameron Smith and Dennis Nayandin developed and released a new dating app, SpecUdate, which is currently focused on the D.C. area. Devised as “Online Dating’s Real Game,” the app seeks to offer a new experience for users in “a fun way for people to break the ice online in a way that hasn’t been done before,” according to Smith, the CEO for the project.

Smith and Nayandin began work a year and a half ago on the project. The computer science majors — who have completely self-funded the project — went released the app on Friday, Oct. 8, with 1,500 subscribers and 100 active users. SpecUdate is open to anyone interested, but initially has targeted GMU and other area universities.

“Once we’ve made a foothold in the DMV area and the Northern Virginia area, we would like to expand to other areas,” said Smith, an Arlington native who attended Yorktown High School. “We want to be as big as we can, but we also want people to share the idea, share the concept, buy into the app itself.” 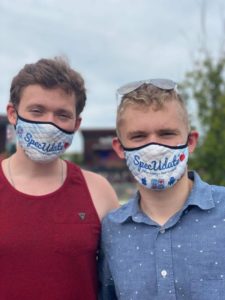 The development and direction of the app came as a result of Smith’s personal experiences with online dating apps and after interviews with college students, gauging their experiences with other services. After gathering the insight of students, chief technology officer Nayandin fit Smith’s vision for the app.

“SpecUdate is designed to help find relationships and friendships, but the way it does it is unique,” Smith said. “Unlike other services, we decided to go a route with our app where it’s actually like a real game.”

As a result of the feedback Smith and Nayandin received from their interviews, the primary focal point of SpecUdate is how users interact and develop connections. Before a connection can progress to a conversation, the app requires users to participate in two social games: “two truths and a lie” and a simple true or false question.

The games are meant to be icebreakers that can be used and referenced after a connection has been made and a conversation has opened between users.

The app — which is compatible on iOS and Android devices — has also taken on the challenge of being as inclusive as possible by taking advice from contacts made through George Mason’s LGBTQ office.

“One thing we had to conquer was ‘okay, how can we make this inclusive for everybody,'” Smith said. “I wanted everybody to be able to use the app, no matter gender or orientation.”

While COVID-19 has impacted the app and the marketing for it, Smith and Nayandin have taken the challenge head on. The duo had 1,000 email signups before the pandemic hit and George Mason went to virtual learning, and they’ve added 500 emails as a result of social media marketing. The app has also been adjusted to allow users to increase their search radius from a maximum 100 miles to 300.

“SpecUdate was designed to be a fun icebreaker dating game where people can actually enjoy playing the game more, as well as enjoy the process of dating, which should be a relaxing, enjoyable process,” Smith said.

“There’s a big stigma these days surrounding online dating apps that prevents a lot of people from even trying them just based off of what they’ve heard from other people, that they’re ‘hook-up apps,’ ‘they’re boring.’ We want to be different than that. We want to be the app that people enjoy to play and have fun connecting on, and is less stressful.”