Two residents of the Fairlington Arbor condominiums were told by the condo board to dig up their spooky gravestones that seek to lay bigotry to rest.

Katrina Reed and her husband Joe decked out their yard with six decorative gravestones, but they papered over the space for names of the deceased to bury hate, racism, religions discrimination, sexism, homophobia and white supremacy instead.

Both Reeds teach and coach high school basketball. As teachers, Katrina said they strive to create an inclusive environment in their remote and in-person classrooms.

“Our thought process was, ‘Why wouldn’t we want to be inclusive at home?'” she said.

The death-to-discrimination markers received a lot of love from neighbors, but drew the ire of the Fairlington Arbor management. The dispute centers around whether the gravestones are signs, which are not allowed unless the Board of Directors approve them, or seasonal decor, which are allowed if they are “modest and in keeping with community norms.”

The letter treats the gravestones as decor, but the messages as signs.

“While the frames on your sign are compliant, the content is not,” the letter said. Joe disputed the application of the bylaw in an email to management.

“The signs displayed are not deemed ‘seasonal’ by the board since they display a message that does not fit the Halloween occasion,” Arbor management said in response. 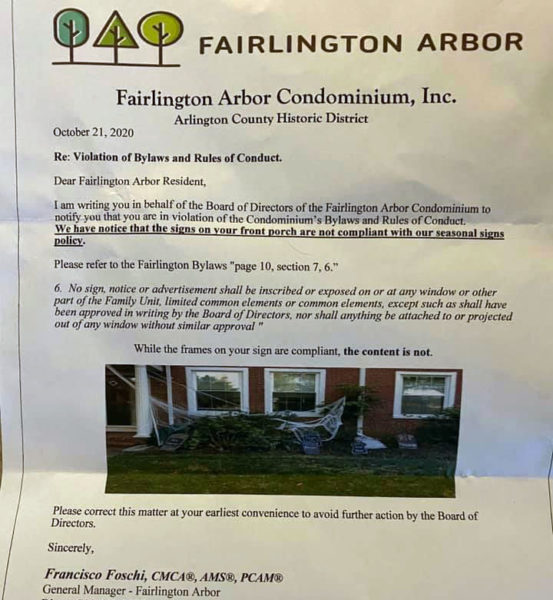 The letter’s author, Fairlington Arbor’s general manager, declined to comment further. In an automated message, Matt Duncan, the President of the Board of Directors, said he is out of office and referred inquiries to management.

In a private neighborhood Facebook group, Katrina asked her neighbors for advice and to see if others had similar experiences. The response was overwhelming, with more than 175 comments on Katrina’s post so far.

“People went nuts,” she said. “They were ready to light their pitchforks and find the board members.”

One Facebook commenter said of the decorations: “We thought they were awesome. 10/10. Do not take them down.”

“These have made me very happy every time I walk by!” another said.

“If you can let people express First Amendment rights within a time period, I think it solves these issues,” Joe said.

The couple said the bylaws need to be clarified and they plan to speak about it during the next board meeting on Oct. 27. Joe said ironically, he was on the board and helped write the bylaws.

On Facebook, some theorized that the condo board was pushed to take action by a handful of complainers.

“Neighbors have been complimentary of our messages of inclusion, but I seem to have offended the racists, homophobes, etc.,” Katrina wrote in her post.

Others guessed that the current political climate might have caused an overreaction by condo management.

“It’s probable that no one is offended by your decorations but management just wants to head off something truly objectionable,” wrote one commenter, who congratulated the couple for speaking up.

This summer, the S. Abingdon Street bridge over I-395 in Fairlington was the site of a showdown between those supporting the Black Lives Matter movement and counter-demonstrators who replaced BLM slogans with pro-Trump messages.