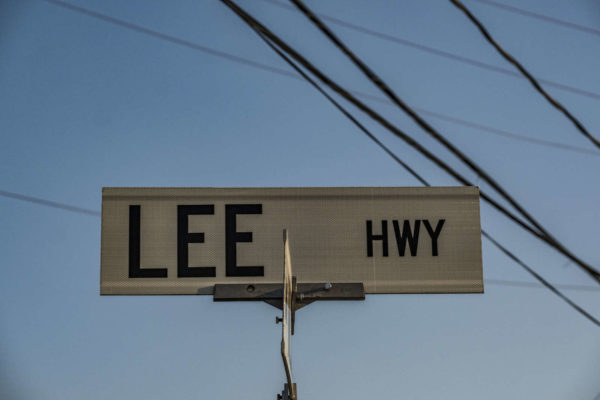 Those are a few of the possible names identified by the group in charge of coming up with a new moniker for Route 29, the main east-west route through Arlington’s northern neighborhoods.

The 25-person task force, formed by the Lee Highway Alliance at Arlington County’s behest, says it has narrowed down a list of 186 names suggested by the community to 20. Those names were revealed Monday afternoon and will be further narrowed down to 3-5 finalists later this year, based on additional community input.

The 20 names up for community consideration are “based on local historical figures, represent broad ideals, or highlight local flora/fauna,” the alliance said. The names are:

“The Working Group will consider street suffix options, such as Boulevard or Avenue, in future deliberations,” the Lee Highway Alliance noted in a press release.

The alliance has created a web page with the background behind each name, as well as an online poll that is expected to remain open through Nov. 30.

“Community input will be considered as part of the Working Group’s decision-making in early December,” the press release says. “Then the top three-five names from the Working Group’s deliberations will move to the County Board, in view of a recommendation that then could go to the Commonwealth Transportation Board (CTB) or the Virginia General Assembly, which controls the final go-ahead.”

The renaming of Lee Highway in Arlington, Va., has taken another step as a Working Group of the Lee Highway Alliance (LHA) has narrowed the community’s suggestions from 186 to 20.

Now, members of the Arlington community again are asked to share their input by Nov. 30 to further narrow the list.

“This is an exciting opportunity for Arlingtonians to participate in a significant transformation in our community,” said Ginger Brown, LHA executive director. “We’re making a concerted effort to engage as many community members as possible. Postcards, social media, outreach to partner groups and civic associations, and a special effort to involve Lee Highway businesses and customers are part of this mix.”

The 20 names under consideration are based on local historical figures, represent broad ideals, or highlight local flora/fauna. The list includes Arcova (acronym for Arlington County, Va.), Ella Baker, James E. Browne, Community, Dogwood, Equity, Green Way, John Glenn, Harmony, Inclusive, Innovation, Justice, John M. Langston, Mildred and Richard Loving, Main Street, Leonard “Doc” Muse, Edward T. Morton, Necostin, Unity, and Maggie Walker. The Working Group will consider street suffix options, such as Boulevard or Avenue, in future deliberations. The poll and brief descriptions of each can be found on the website of the Lee Highway Alliance, which is sponsoring the renaming process under the auspices of the Arlington County Board.

The original 186 suggestions were submitted between Sept. 2 – Oct. 23. “We encouraged as many people as possible in the community to submit ideas,” said Paul Holland, a member of the Working Group. “We wanted to cast a wide net, and we are glad that people who have lived in Arlington for 50 years participated as well as those who have lived here for two or three years.”

That sentiment was echoed by Lynn Coates on the Working Group. “We wanted to give folks a lot of running room in the beginning, and then we used several criteria to winnow the list in stages.”

The Working Group sought out input from subject matter experts, including a Branding Advisory Group that gave advice for a workable and appealing name. An Institutional Advisory Group of education experts, Arlington historians, and other community members advised on engaging the community. A subcommittee of the Working Group spent a long Saturday applying the criteria as well as “rules,” such as “must not duplicate the name of a street already existing in Arlington.” And the Working Group, taking such counsel into account, again discussed the ever shorter list.

The push to replan Lee Highway began in 2013, when the neighborhoods agreed to focus on rethinking the corridor. LHA began discussing changing the entire name – both Lee and Highway – in 2017 to be in accord with LHA’s guiding principles. Sandi Chesrown, Co-founder of LHA, and a member of the

Renaming Working Group said: “During the past 7.5 years of working with hundreds of people to transform the corridor into more of a Main Street, we have learned a lot about it. Neither ‘Lee’ nor ‘Highway’ reflect our local history, our values, and our future aspirations.”

Community input will be considered as part of the Working Group’s decision-making in early December. Then the top three-five names from the Working Group’s deliberations will move to the County Board, in view of a recommendation that then could go to the Commonwealth Transportation Board (CTB) or the Virginia General Assembly, which controls the final go-ahead.