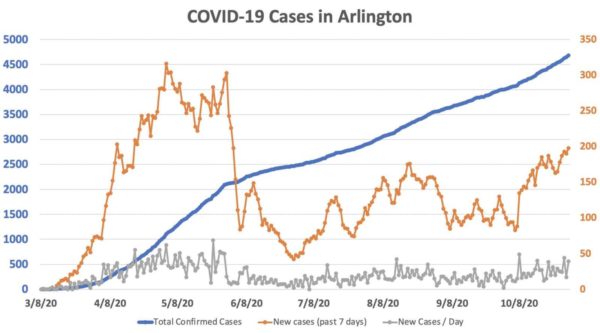 The average rate of new coronavirus cases in Arlington is the highest it’s been in nearly five months.

Overnight 39 new cases were reported in the county, bringing the seven-day trailing total to 198. The last time the number was that high was June 2, as the county’s spring epidemic was petering out. The seven-day peak was 316 cases on May 3.

The cumulative total of cases in the county now stands at 4,686, according to the Virginia Dept. of Health. 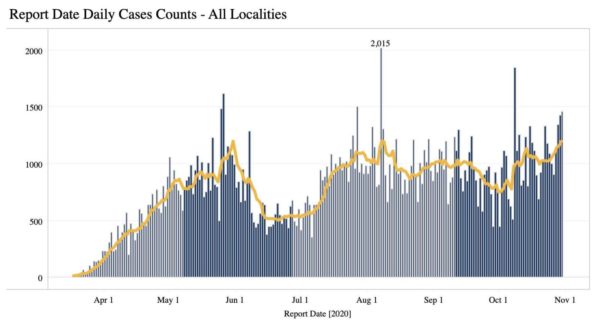 The rate of new cases statewide, meanwhile, has been increasing. The current seven-day trailing average of new daily cases in Virginia is 1,194, just four shy from the previous peak in August and one shy from the spring peak in May.

Northern Virginia topped 300 new COVID cases for the third straight day yesterday, while the U.S. recorded more than 90,000 cases, a single-day record for the country.

According to the Washington Post’s pandemic tracker, new cases, hospitalizations and deaths nationwide have risen 21.3%, 12.8% and 2.2%, respectively, over the past week.

Health experts say they’re concerned about the pandemic getting worse as the weather gets colder, perhaps mirroring the increasingly dire situation in Europe.

"If you have rising infections against a rising positivity rate that's a really worrisome sign. That's an indication you have an accelerating epidemic in your state," says @ScottGottliebMD. pic.twitter.com/fRsXimcA1E