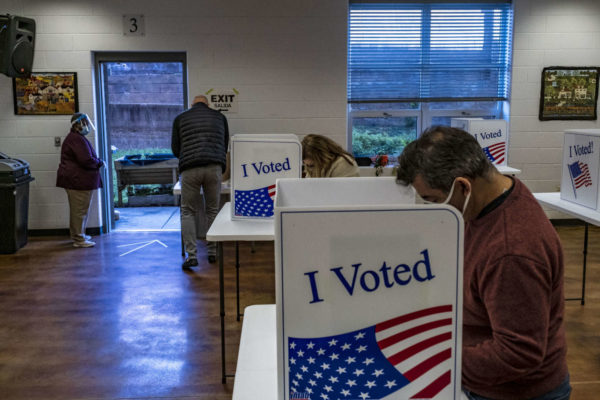 (Updated at 3:50 p.m.) Almost two-thirds of active voters in Arlington have already voted.

That’s according to the latest totals released by Arlington County’s elections office, following the end of in-person early voting on Saturday.

As of Sunday, 104,988 votes had been cast in Arlington, according to the county: 45,108 via mail and 59,880 via in-person early voting. That represents about 63% of active voters, far exceeding the record-breaking, pre-Election Day turnout of the 2016 presidential election, during which 26,947 voted in-person early and about 10,000 cast mail-in ballots.

Although in-person early voting and supervised ballot drop-off has ended, those who still have outstanding mail-in ballots — nearly 6,000 residents, according to the county — can either place them in one of the Arlington’s 24-hour ballot drop boxes or drop them off at a local polling place on Election Day.

Polling places will be open from 6 a.m.-7 p.m. on Tuesday. All voters are being encouraged to wear a face covering.

To make sure things go smoothly at the polls, Arlington says it is deploying extra police patrols.

“The County is monitoring election-related activities to ensure that voters can get to the polls and exercise their right to vote in a safe and uninhibited manner,” the county said in a press release today. “[The] Arlington County Police Department will have increased patrols in the community, with polling place awareness, but will not have officers stationed at polling places.”

Arlington also reminded residents that Tuesday is an official county government holiday, meaning that metered parking will not be enforced.

Asked about possible delays in counting ballots on election night, Gretchen Reinemeyer, the county’s Director of Elections, suggested that the deluge of early and mail-in ballots shouldn’t slow things down here — as those ballots have already been counted.

“We consider a ballot is counted when it is read by a scanner. When you vote early, you insert your ballot into the scanner. It is counted at that point in time,” she told ARLnow today. “We’ve been processing mail ballots since early October.”

Reinemeyer noted, however, that election officials will not tabulate the results of the early votes until the polls close at 7 p.m.