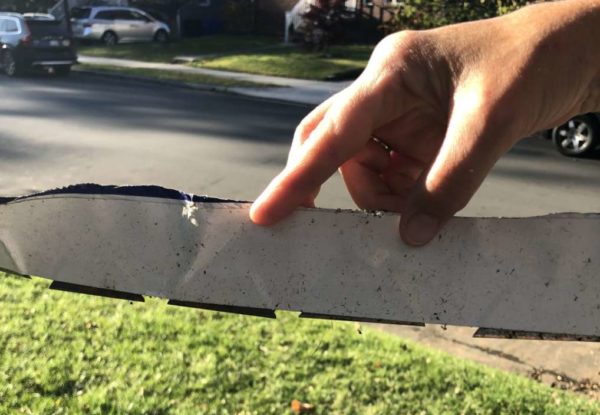 Arlington County police are investigating a case of razor blades taped to the bottom of a political sign.

A victim was cut after she removed a sign from along George Mason Drive on Wednesday afternoon, suffering minor injuries, police said today. A photo released by police show several razor blades attached to the bottom of the sign.

“The Arlington County Police Department is investigating… and is urging the public to take caution when removing these items,” police said in a press release. The department is also asking for members of the public to come forward with tips.

Police did not speculate about a motive for the razor-laden sign, but this year’s fall election cycle in Arlington was marred by widespread removal and destruction of political signs. So far, no other incidents of this nature have been reported, police said.

The Arlington County Police Department is investigating the report of razor blades located on the bottom of a political sign and is urging the public to take caution when removing these items.

Between noon and 3 p.m. on November 4, the victim was removing political signage located in the median of George Mason Drive between Yorktown Boulevard and Four Mile Run Drive. Upon bringing these items back to a family member’s home, the victim was separating the signage from the metal base when she was cut by razor blades taped to the bottom of the sign. The victim suffered minor injuries which did not require medical treatment. At this time, no other reports of similar incidents have been reported in Arlington County.

This remains an active criminal investigation and anyone with information related to this incident is asked to contact the Arlington County Police Department’s Tip Line at 703-228-4180 or ACPDTipline @arlingtonva.us. Information may also be provided anonymously through the Arlington County Crime Solvers hotline at 1-866-411-TIPS (8477).

The Arlington County Police Department encourages community members to inspect signage before and after they are removed from the public right-of-way and private property. If you observe signs of tampering, report for investigation by calling the Emergency Communications Center at 703-558-2222 or 9-1-1 in an emergency.