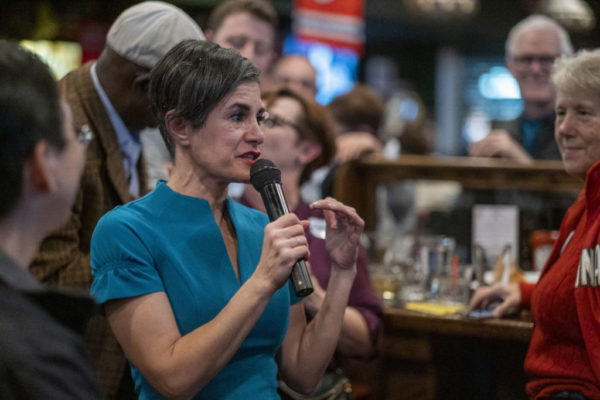 (Updated at noon) The Arlington County Circuit Court rejected a plea bargain that would place a Maryland man on two years of probation for allegedly bringing 50 pounds of marijuana and 400 cartridges of hashish oil into the county.

The suspect is accused of arriving on a flight to Reagan National Airport in November 2018 with a checked bag stuffed with drugs. He was arrested by the Metropolitan Washington Airports Authority at baggage claim.

Commonwealth’s Attorney Parisa Dehghani-Tafti and the attorney representing the alleged drug carrier agreed that the defendant would plead guilty to two felony charges and be placed on probation, wrote the presiding judge. After completing the probation and 200 hours of community service, he would be able to withdraw the pleas to the felony charges and instead plead guilty to two misdemeanor charges while having a $100 fine imposed but then suspended.

Judge Daniel Fiore, II, in a memorandum of opinion that was obtained by ARLnow, said the punishment would not deter the defendant, or anyone else, from carrying large amounts of drugs into Virginia for distribution.

“Virginia jurisprudence has long and consistently recognized deterrence as means for a court to determine an appropriate sentence, no matter the criminal statute violated,” Fiore wrote. “Deterrence disincentives unlawful behavior both for the individual and for society.”

Excerpts of Fiore’s opinion were published in late September in Virginia Lawyers Weekly. A call to judge’s chambers was not returned. Dehghani-Tafti told ARLnow that she could not comment on the case at this point.

This rejected bargain is part of a larger theater taking place across the nation, as some prosecutors are changing their approach to drug crimes and judges are fighting back. The tug-of-war reached Virginia Gov. Ralph Northam, who signed a law last month that would require judges to dismiss charges when both the prosecution and defense agree to a bargain or deal.

Fiore wrote that he rejected the bargain in part because the prosecution and defense had understated how much marijuana and hashish the defendant had. The amounts, once disclosed, merited prison sentences between five and 40 years and fines of up to $500,000, Fiore wrote.

Focusing on the quantity of drugs strikes Public Defender Brad Haywood as a bit naive, considering the defendant was likely a low-level “drug mule” put in a high-risk situation by higher-level drug traffickers. He might not have known the quantity of drugs he was carrying, as mules often do not, Haywood said in an email, adding that mules are often thought of as victims of drug trafficking.

“They are under duress; fearful for their safety, desperate for money, or desperate to feed their own addictions,” he said. “They are easy to manipulate precisely because they are suffering. They can even be pressured into doing something as irrational as traveling on a plane with tons of narcotics.”

Given the risk involved, mules are often caught, Haywood said. Instead of harshly prosecuting mules, however, the government frequently offers them leniency so they can help apprehend the supplier.

“I have no idea if that is or isn’t going on here,” he said. “You would not know about it, the court might not know, nor would it be appropriate for anyone to know if a defendant had been enlisted to cooperate.”

Prosecutors should be able to make plea deals and dismiss cases without court interference because disclosing some facts could jeopardizing investigations and dissuade future defendants from cooperating with investigations, said Haywood.

“From that perspective, far from promoting deterrence, a judge who rejects a plea deal based on cooperation might actually be making future drug prosecutions more difficult, and the community less safe,” he said.

Fiore follows a trend among other judges in Virginia’s circuit courts who have rejected especially lenient plea bargains in drug cases.

In Norfolk, circuit court judges had blocked the attempts of Commonwealth’s Attorney Greg Underwood to drop marijuana-related charges, and he unsuccessfully challenged the decision in the Supreme Court, according to the Virginian-Pilot.

This case was cited by state Sen. Scott Surovell (D-Fairfax) and Del. Mike Mullin (D-93), who sponsored the bill in the Virginia General Assembly.

Like Underwood, Dehghani-Tafti has promised to reduce prosecutorial resources spent on prosecuting low-level drug crimes. After her election, the county’s four Circuit Court justices imposed a policy that would require prosecutors to write written briefs explaining why they decide to drop charges or enter a plea bargain.

In response, Dehghani-Tafti said she is fighting for prosecutorial discretion. She filed a petition asking the court not to hold her to a policy. A criminal-justice organization for prosecutors filed a friends-of-the-court brief supporting her.

The judicial tug-of-war follows a national trend away from the “war on drugs.” On Election Day, voters in a half dozen states approved ballot measures legalizing recreational marijuana use, allowing medical marijuana use, or decriminalizing other types of drug use.