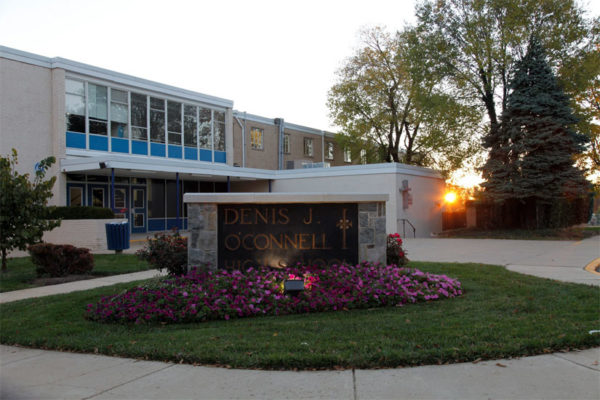 Bishop O’Connell High School went fully virtual on Friday, and will remain so until December, out of an abundance of caution after two positive cases came to administrators’ attention.

The two cases were traced to what head of school Bill Crittenberger called “an off-campus gathering” with “quite a few young people” on Halloween (Oct. 31).

Given the uncertainty and the number of students at the gathering, administrators decided it made more sense to go virtual than to quarantine specific individuals.

“We felt like it’s not as simple as flipping a switch, but staff was seasoned from having done it in the spring,” Crittenberger said of moving to virtual learning. “I’m really proud of how O’Connell transitioned in less than 24 hours,” he said.

The school, in Arlington’s East Falls Church neighborhood, does not itself provide tests for students. Both families independently got tested and notified the school.

Although some schools may be more explicit about asking students to agree to COVID-19 norms, he said the expectation at DJO is that students follow Catholic social teaching and the commandment to “love your neighbor as you love yourself.”

“To be fair, some of the things that this gathering were about put folks in a spot that wasn’t ideal,” said Crittenberger.

Otherwise, everybody has been extraordinarily compliant about social-distancing and wearing masks, he said.

The students and faculty will be fully virtual for two weeks, which leads into the Thanksgiving break. Their first day back will be Dec. 1, a Tuesday.

Crittenberger said the response to the closure was fairly minimal and largely positive, with some suggesting that the virtual learning be reduced to one week.

“We’ve tried to be lockstep with the community,” he said.

Arlington public schools, meanwhile, will remain virtual for most students through the end of the year.