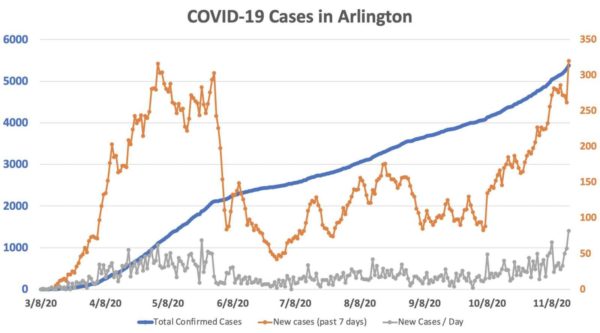 (Updated at 3:25 p.m.) Arlington County has just recorded the highest seven-day total of new coronavirus cases since the start of the pandemic.

New data from the Virginia Dept. of Health brings the county’s seven-day total to 320 cases, topping the previous peak of 316, at the height of the spring epidemic on May 3. The 320 total cases represents a seven-day trailing average of just under 46 cases per day. 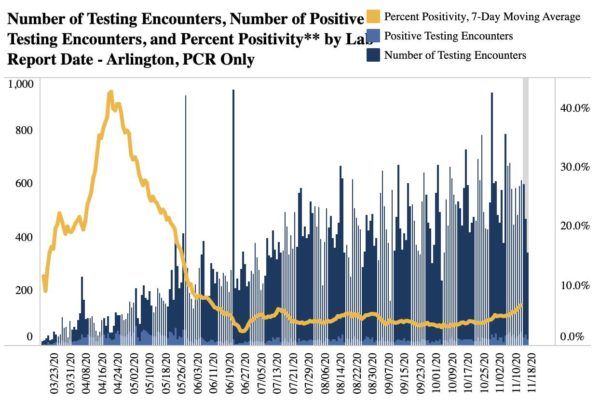 Two new COVID-related deaths and three new hospitalizations have been reported since Friday. The seven-day hospitalization total in Arlington currently stands at 15.

VDH also reported the highest one-day spike in new cases in Arlington today — 82 new cases — but that comes with an asterisk. The state health department says numbers were higher today because its systems were catching up from a backlog over the weekend caused by technical upgrades. Despite the backlog, VDH reported 50 local cases on Saturday and 57 cases on Sunday.

Across the Potomac, the District of Columbia also reached a seven-day case record on Sunday. The District imposed new travel restrictions last week.

Virginia Gov. Ralph Northam announced new restrictions on Friday, which took effect this morning. Those restrictions include slashing the maximum size of indoor and outdoor gatherings to 25, reducing the age for the state’s mask requirement to 5, and a 10 p.m. alcohol sales curfew at all dining and drinking establishments. The Commonwealth also plans to step up enforcement.

Ryan Hudson, spokesman for Arlington County’s Public Health Division, said in a statement Monday afternoon that residents should continue wearing masks but should also “stay home as often as possible.”

Unfortunately, Arlington County is indeed seeing a rise in cases, much like Virginia and the rest of the country. As our recent contact tracing data shows, 33% of Arlington’s cases have reported contact with a known case and 17% reported going to a gathering. An increase in people gathering together allows for germ spread, which makes it easier for COVID-19 cases to rise. We know you are likely fatigued by the pandemic and restrictions. But we also know that these mitigation efforts work: Avoid large gatherings, wash your hands, wear a face mask and maintain proper physical distance. Now is not the time to get complacent.

We’re imploring all Arlingtonians to continue to abide by the public health guidance to help us flatten the curve again:

Despite the backdrop of rising cases locally and nationwide, there is a light at the end of the tunnel. Today pharmaceutical company Moderna announced that preliminary trial data shows that its coronavirus vaccine is nearly 95% effective. That tops the 90% efficacy of the Pfizer vaccine, announced last week.