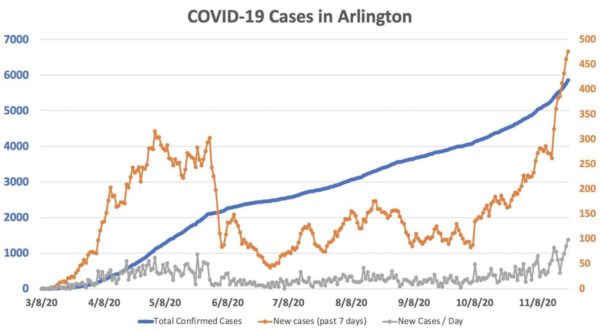 (Updated at noon) Both Arlington and Virginia as a whole reached fresh one-day and trailing seven-day peaks for new coronavirus cases today.

In Arlington this morning, a record 98 new cases were reported, bringing the trailing seven-day average to its eighth consecutive daily record: 68 daily cases, or 476 cases over the past week.

The county’s test positivity rate is currently 7.1%, and an average of 773 tests are being performed per day; the latter is also a record. The cumulative total of reported COVID-19 cases in Arlington during the course of the pandemic is now 5,856.

“The number of new COVID-19 cases in the Fairfax and Loudoun health districts is officially surging, according to new analysis from the University of Virginia, and the Northern Virginia region’s overall caseload is at its highest level since it peaked May 31,” InsideNova reported on Sunday. Case averages are also at a new high in Montgomery County, Maryland, Bethesda Magazine reports.

Throughout Virginia, 3,242 new cases were reported today, according to Virginia Dept. of Health data, bringing the trailing seven-day average of new daily cases to 2,343. The state’s test positivity rate is 7.2%.

VDH noted that Monday’s case counts are higher “in part due to a catch-up from the VDH data system being down for upgrades for a few hours over the weekend.” 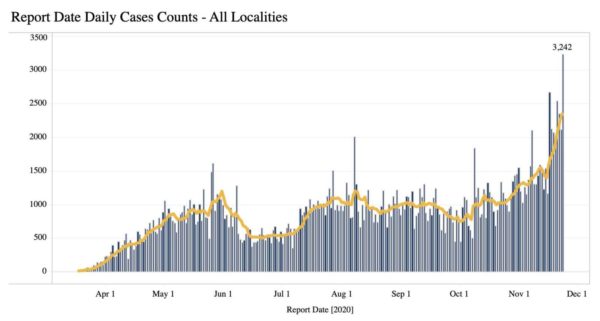 There is more positive vaccine news this morning, but that doesn’t mean that the pandemic will end and life will get back to normal in the near term. In his weekly public Facebook post, Virginia Hospital Center ER chief Mike Silverman suggested that the second half of 2021 might be when to expect a return to normal.

“Although vaccines will roll out in the near future, it will take until summer of 2021 before the last cohort (young, healthy people) are able to get vaccinated,” Silverman wrote. “This means mask wearing and COVID restrictions well into next year. But I think the light at the end of the tunnel could be school starting next fall and life returning to normal. We’re 9 months in with likely another 9 or 10 to go, but at least we now know the end point.”