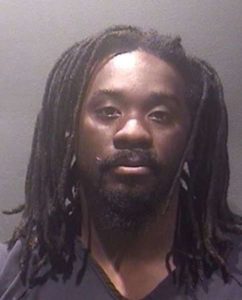 A man accused of burglarizing homes in the Penrose neighborhood, and in one instance touching a woman inappropriately during a break-in, has been arrested.

The arrest happened around 1 a.m. this morning in the Penrose neighborhood. Police say they were staking out the area around Friday’s sexual battery incident, on the 2500 block of Arlington Blvd, when officers “observed the suspect acting suspiciously as he entered the backyard of residences.”

“While additional units responded to assist with the investigation, the suspect entered his vehicle and attempted to flee the scene,” Arlington County Police said in a press release Tuesday afternoon. “A traffic stop was initiated, and the suspect was taken into custody without incident. During a canvas of the scene, officers located several window screens which had been cut and removed from the frames to include at the address of the original incident.”

“Alijah Hall, 26, of Waldorf, MD, was arrested and charged with Burglary: Break and Enter at Night with Intent to Commit a Felony or Larceny and Possession of Burglarious Tools,” police said. “He is being held without bond in the Arlington County Detention Facility.”

The press release added that “anyone with information related to this incident is asked to contact Detective J. McGrath at 703-228-4244 or [email protected].”

Here's a brief video of the @ArlingtonVaPD traffic stop that resulted in the arrest at S. Fillmore & 2nd at 1:00 this morning. pic.twitter.com/datoh3hh7Q