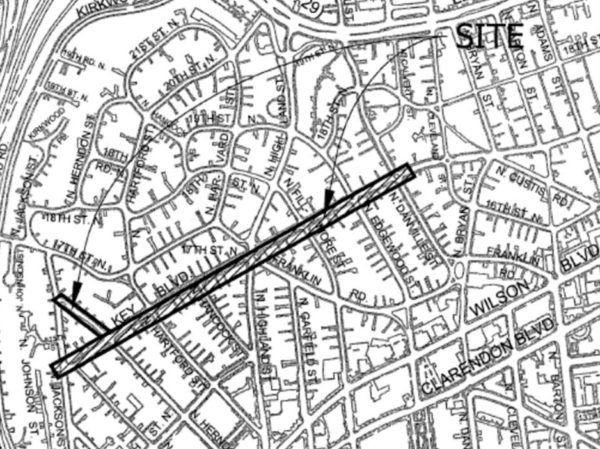 A 94-year-old water main that runs under the residential area north of Clarendon to Courthouse is finally set to be replaced.

On Saturday, the County Board approved a contract for the construction of a new water main along Key Blvd, running from N. Jackson Street to N. Danville Street in Lyon Village. It passed as a consent item, meaning it was deemed non-controversial and was acted upon by a single vote.

The new water main will replace the existing one, which was built in 1927. The new main will improve fire flow capacity and meet neighborhood demand, county staff wrote.

The staff report notes that the aging water main has “had an excessive number of breaks in the past few years.” This includes most recently in July, Arlington’s Department of Environmental Services (DES) confirms.

This project is one of a number of recent efforts to replace old, unlined cast iron pipes, which can more easily break and become corroded.

The contract for the Key Blvd water main was awarded to the lowest bidder, Crown Construction Services, which provided an estimate under the county engineer’s estimated cost. As approved, the authorized contract total is $1.4 million, including contract contingencies.

The county has previously worked with Crown Construction on the Glencarlyn Park renovations.

Construction is expected to start this spring, a DES spokesperson tells ARLnow, with completion set for fall 2022. Water disruption notices will be sent to all affected residents.

Planned water service disruptions will “typically less than a day,” according to the county staff report, and will be limited to 9 a.m. to 4 p.m. Monday through Friday.