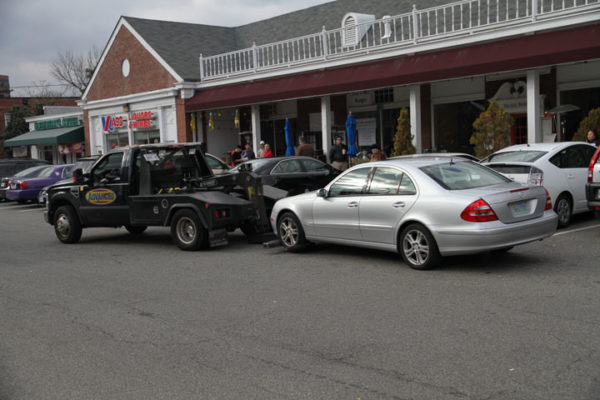 A number of the proposed changes would bring the county’s ordinance in line with Virginia law, which was recently updated. However, several may be met with public pushback, including increases in some towing fees.

Today (Tuesday), as part of its recessed meeting, the County Board will vote to advertise a public hearing in February on the changes, as proposed by the County Manager and Trespass Towing Advisory Board (TTAB).

The proposals include updating the definition of “immobilization,” reinforcing the ban on certain public safety vehicles from being towed, and more re-defining who is allowed to tow and when.

The definition of “immobilization” would mean anything “that does not damage the vehicle,” including booting and using barnacles, for which the towing operator can charge a $25 fee to remove. To bring county code in line with Virginia’s, it clarifies language specifying that police, fire, and public safety vehicles parked temporarily can not be towed.

TTAB also agrees that vehicle owners should be able to request information via email from towing operators, like photos and authorization contracts. An email address would must be provided by the towing operator.

Basic towing fee increases are being proposed, from $135 to $150, as well as an increase of the additional fees for night and/or weekend towing, from $25 to $30. That brings the maximum possible towing fee to $210, for a vehicle towed on a weekend night.

This accounts, according to the TTAB, for “rising labor costs and shortage of qualified commercial driver candidates.”

An additional fee change would lower the cost to pay a tow driver to release a vehicle, if the owner arrives before it’s towed.

“The County Manager recommends reducing the in lieu of towing, or ‘drop fee’ from $25 to $10,” a presentation on the changes notes.

Another change would be who is allowed to tow and when.

In April 2017, Virginia Governor Terry McAuliffe signed a bill that contradicted a county law forcing local businesses to authorize each individual tow from their property (or “real-time authorization”).

Only months earlier, the Arlington County Board had voted to approve this real-time authorization as a means “to mitigate aggressive towing practices” — a recurring issue in Arlington. The County Board chair at the time, Jay Fisette, expressed disappointment at the governor’s decision. (McAuliffe is currently mounting another gubernatorial campaign.)

Now, the County Manager and TTAB are proposing to bring county code in line with the Commonwealth and to officially negate the 2016 county law. Using “language derived” from Virginia, the county is proposing that a written contract is enough authorization for towing operators to monitor and tow from private lots without real-time authorization.

Other changes are being proposed to the ordinance with the stated goal of consumer protection. Those include ensuring towing facilities are properly lit, towing placards are properly displayed, and requiring that towing signs “clearly state hours of the day, and days of the week, that towing is in effect.”