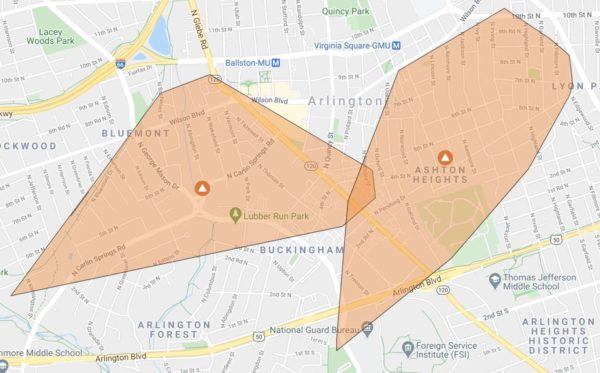 A widespread power outage is currently affecting parts of Arlington.

More than 3,500 Dominion customers were without power in the county as of 9:30 p.m. Affected neighborhoods include Ballston, Bluemont, Buckingham, Ashton Heights and Lyon Park, according to the power company’s outage map.

Residents near those neighborhoods might have seen their power flicker around 9 p.m.

The outage happened after a driver in a Toyota Prius slammed into a utility pole in the Buckingham area. On social media, the Arlington County Fire Department said it is “unknown” when power will be restored.

#Alert: Power outage in the area north of Rt 50 by Glebe Rd is due to a pole being struck. @DominionEnergy is en route. Expected time before power is restored is unknown. pic.twitter.com/lOToxRE9eq

Update at 10:15 p.m. — Power has been restored to most customers, but about 500 in the Buckingham area, near the crash, remain in the dark.

Vehicle crash into Arlington pole @ 89 N Glebe Rd knocked out power to 2016 customers at 9pm. With proactive switching we restored all but 181 customers. Our crews are repairing the damage.
We hope to have all restored by 3am Thanks for their hard work & for customers’ patience! pic.twitter.com/svJYuMXcNK