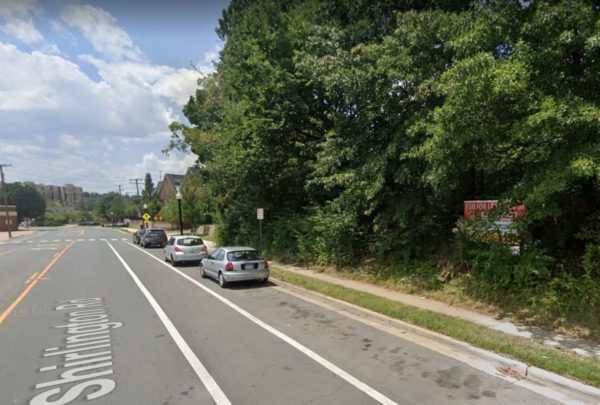 Arlington-based Saint Timothy and Saint Athanasius Coptic Orthodox Church is making plans to build a new church building on a vacant lot in Green Valley that it recently acquired.

The church — which also goes by the abbreviated STSA Church — currently rents space at George Mason University’s Virginia Square campus at 3351 Fairfax Drive. It is, however, operating virtually due to the coronavirus.

STSA Church was established in Arlington in 2012 with a mission to “bring an ancient faith to a modern world,” according to the website.

Fr. Anthony Messeh, the church’s pastor, confirmed the planned expansion in an email with ARLnow, saying he will have more details in the coming weeks.

The site at 2640 Shirlington Road is a 39,867-square-foot parcel of vacant land, according to Arlington County property records, overgrown with trees and brush.

The Arlington County Board was tentatively slated to approve an easement associated with the new ownership at its meeting on Jan. 23. The item was removed from the agenda, however, because the form of the deed “is not finalized and the plat had not been approved in time for the January meeting,” said Mary Curtius, a spokeswoman with the county board office, in an email.

The item will likely come before the County Board in February or March, Curtius said.

Old blog posts and YouTube videos indicate that the church community has been looking to buy for years. In 2014, it ran a campaign to raise $2 million to purchase a building, but the attempt appears to have been unsuccessful and the campaign website no longer works.

“Unfortunately, we cannot have signage to let people in Arlington know that there is a church here to welcome them,” according to a video from 2o14. “We currently exist only on Sunday mornings as far as the community is concerned, and that lack of full-time presence has prohibited us from reaching more people.”