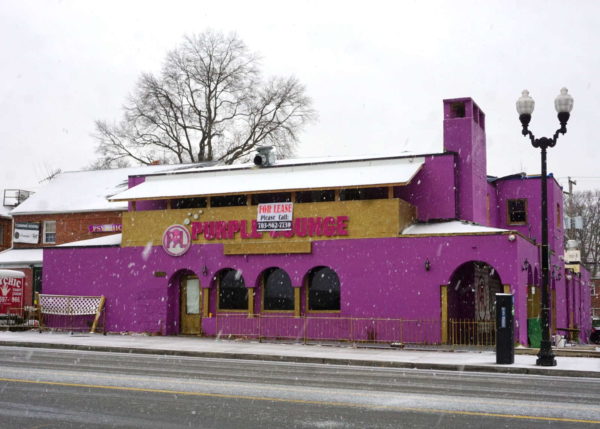 A former Columbia Pike business has inspired a state bill that would allow localities greater say over liquor licenses.

HB 2131 was introduced in the Virginia House of Delegates last month by Del. Alfonso Lopez, who represents Arlington — including portions of the Pike — in the 49th District.

It has since passed the House unanimously and is now in the Virginia State Senate.

The bill is a response to a number of incidents, including multiple shootings, that took place in 2020 at the nightlife venue Purple Ethiopian Restaurant & Lounge at 3111 Columbia Pike.

Despite “a series of disturbing events” and much to the chagrin of the Arlington County Board, the venue was given its liquor license back by the Virginia Alcoholic Beverage Control Authority in September.

While the Purple Lounge has since closed, HB 2131 would allow greater input from localities about what businesses are granted liquor licenses by the Virginia ABC. It would add “chief administrative officer of a locality” to the list of those sent license applications. In Arlington County’s case, that’s the County Manager.

It also would expand the definition of “criminal blight,” meaning a condition on the property that endangers the public health or safety of local residents, thus making it easier for a license to be denied in cases of criminal activity.

Delegate Lopez tells ARLnow that he believes that this is the most important part of the bill.

“We’ve tightened the firearm section. In the past it had said repeated use of firearms,” says Lopez. “What we’ve done is [added] the simple discharge of a firearm once now it rises to the level of the criminal statute.”

The bill also adds “in possession” of a controlled substance, as opposed to just “under the influence,” and includes criminal activity that takes place on the property — like, in the parking lot — as opposed to simply in a building.

“It is easier now for community groups to give proof [of criminal activity],” says Lopez. “It’s easier for localities to meet the threshold by which they can report a bad actor establishment to ABC.”

Virginia ABC remains the only agency that can suspend or revoke liquor licenses.

While the frustration in the community over the Purple Lounge directly influenced this bill, Lopez says that he’s heard of similar situations in other Virginia jurisdictions.

Kristi Sawert, President of the Arlington Heights Civic Associations, is one of the local leaders that helped bring attention to the matter. She says “a lot of bad things were happening” at the Purple Lounge that were upsetting and scaring residents.

Sawert says too often she felt that the local civic associations were “kind of shut out of the process” when it came to the Virginia ABC making decisions and settling liquor license disputes. She applauds this bill since it gives Arlington County more tools and more say in preventing businesses like this from operating in neighborhoods.

She also thinks it would be advantageous to include civic associations on the list of those that would receive liquor license applications.

“99.9% of the time, there’s no issue at all with any type of business getting their alcohol license,” says Sawert. “This would give another opportunity for civic associations in Arlington a chance to weigh in on what’s going on in their boundaries. I think it’s just more information.”

“Arlington was supportive of this legislation, which is why Board Member Takis Karantonis provided testimony before the House General Laws Committee on behalf of the Board,” he writes to ARLnow. “We appreciate Delegate Lopez’s efforts on behalf of our residents in this matter.”

The bill was referred to the Committee on Rehabilitation and Social Services in the Virginia State Senate on Feb. 4.

Lopez remains optimistic that it will pass the Senate, be signed by the governor, and become state law.

“I am hopeful that it will pass the Senate,” he says. “But, you know, the Senate is very different than the House.”