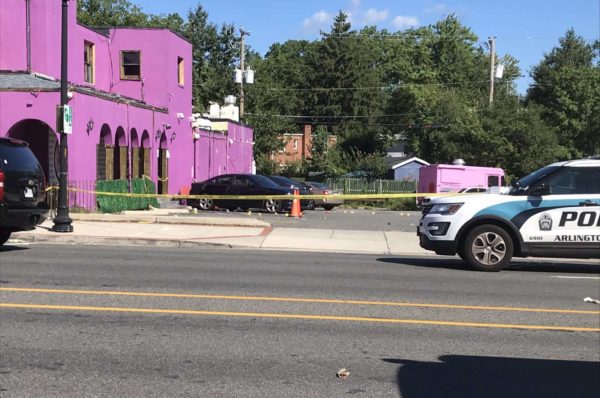 (Updated at 4:05 p.m.) Purple Ethiopian Restaurant & Lounge has had its permit to serve beer, wine and liquor suspended by the Virginia Alcoholic Beverage Control Authority.

The nightlife venue at 3111 Columbia Pike was the scene of a double shooting over the weekend. A 33-year-old Maryland man, who was wounded by armed security guards after allegedly firing into a crowd in the parking lot, has been charged in the case.

Purple Lounge was also the scene of a shooting last September, in which a man was shot in the abdomen outside the venue. That and a myriad of complaints and violations led the Arlington County Board to revoke its live entertainment permit in December.

After the latest shooting, Arlington County Board Chair Libby Garvey told ARLnow that the county would “explore all the options” with respect to Purple Lounge. Today, the county announced the suspension of the ABC license in a brief statement.

Following a series of disturbing events associated with the Purple Ethiopian Restaurant and Lounge, LLC on Columbia Pike, the Virginia Alcoholic Beverage Control Authority issued an Order of Summary Suspension temporarily suspending its alcohol licenses effective September 1, 2020. Arlington County fully supports this action and will continue to work collaboratively with Virginia ABC throughout this process.

The incident on Sunday morning (Aug. 30) at the Purple Lounge is the latest in a series of disturbances associated with the establishment. The County Manager is working with the County Board to explore all the options available to us within and around the property.

Arlington County is a safe place to live, work and play, and we are committed to addressing problems that present potential threats to our public health and safety.

Virginia ABC’s summary of its decision to suspend the license contains additional details about the weekend shooting and another shooting earlier this summer.

The report says that a dispute between venue staff and a group of people who were denied entry into the lounge just before 5 a.m. on Sunday prompted one of the members of the group to pull out of a gun and start firing in the air. That, in turn, led to a security guard firing back, striking one person in the shoulder and grazing another’s neck.

The report also says that a previously-reported triple shooting in June along Columbia Pike was the result of a dispute that started at Purple Lounge.

“On June 28, 2020, there was an incident of gunfire where following an altercation inside the establishment the suspect drove away from the area and then fired a gun into the crowd in the parking lot of the business leaving two people injured,” Virginia ABC said.

Arlington County Police did not previously reveal that shooting’s connection with Purple Lounge. The ABC report does not reference the fact that a third person was shot and killed in a car during the incident, a crime for which two people were subsequently arrested.