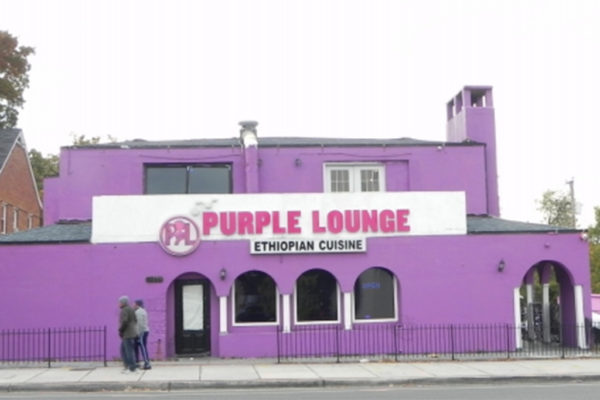 The Arlington County Board has voted 4-1 to revoke the live entertainment permit for a Columbia Pike nightlife venue with a history of violations.

The County Board held a rare “off-cycle permit review” for Purple Ethiopian Restaurant and Lounge (3111 Columbia Pike) during its meeting this past Saturday, after county staff recommended revoking the restaurant’s ability to host music and dancing due to safety concerns.

Between last January and this November, the Arlington County Police Department answered a total of 69 calls to the restaurant/hookah bar/nightclub, per a staff report. Of those, 58 calls were made during live entertainment events, and reported incidents ranged in severity from noise complaints to security using pepper spray against patrons to assault.

Notably, one person was shot outside the lounge early on a Thursday morning in September, resulting in a non-life-threatening injury and an arrest.

“Purple Lounge is contributing to alcohol-related harm, and that is affecting public safety,” said county planner Kristen Walentisch during a staff presentation. “Its live entertainment use is intensifying that situation.”

Adding to concern, the restaurant also faces multiple health code violations and is the process of appealing a violation from the Virginia Alcohol Beverage Control Bureau for sales to a minor. The County Board also noted the Fire Marshal’s Office found 10 violations of Fire Code last year, which have since been addressed.

In effort to improve the situation, last month the County Board tasked Purple Lounge with participating in ACPD’s Arlington Restaurant Initiative (ARI), which was established last year “to raise the standards of restaurants that serve alcohol.”

According to ACPD’s Nightlife and Restaurant Liaison Officer Jim Mastoras, since the Thanksgiving holiday, police officers and fire marshals have trained Purple Lounge staff on a number of safety issues, including:

“I think with this training, the staff will be fully accountable — we acknowledge there were mistakes,” said a Purple Lounge representative during the board meeting, noting the restaurant had reduced its alcohol sales during weekdays and now firmly upholds a last call on the weekends at 1:30 a.m.

The County Board concluded, however, that there was sufficient evidence from ACPD to suspend the restaurant’s live entertainment license, with the opportunity to apply again in a year.

“When it comes to minority communities, we have to be very mindful that we’re not giving unequal treatment, inequitable treatment, and in this case I do not believe that is the case,” said Board Chair Christian Dorsey. “I believe there are some problems that need to be corrected — we’ve got issues with drinking, impact on patrons, late night hours, and inspection concerns.”

Nearby residents, Board members said, were rightfully concerned about violent incidents — many occurring in the early morning hours, well after posted closing times — just steps from their front yards.

Dorsey called the revocation “the ultimate last step” and suggested the Board was doing it reluctantly, but out of necessity.

The dissenting vote was cast by County Board member Katie Cristol, who noted the restaurant’s cooperation with ARI training over the last month.

“I’m having a harder time with this decision than I was a month ago,” Cristol said. “We asked them to work, to train their staff to address these issues, and they did.”

Purple Lounge is not the first business at this address known for its nightlife issues. Pines of Italy restaurant had its live entertainment permit similarly revoked in 2014 — an action that notably led to someone calling Board members an obscenity after the vote.