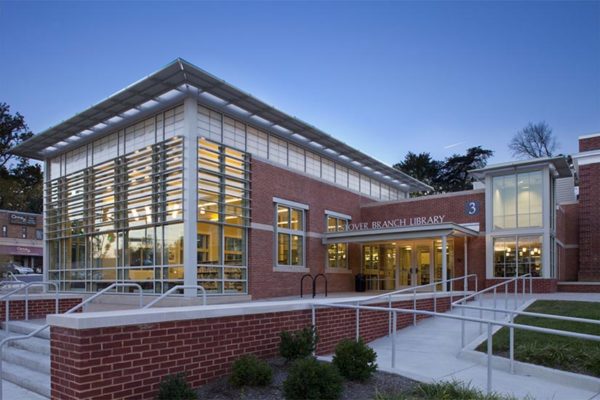 The Shirlington and Westover branches will open their doors on Tuesday, March 9 for the first time in almost exactly one year.

Patrons will be limited to 15 minutes of in-person browsing, though there’s a possibility of expanding to 30 minutes depending on “patron demand.”

While only self-service checkout will be available, several library employees will be on-site at each branch to help with way-finding and account management. Holds pick-up will also be available.

Henrik Sundqvist, spokesperson for the Arlington Public Library, says this is a step in the library’s phased approach to reopening.

“With this express library service model, we are excited to reopen and reconnect with our communities,” he said.

In November, the Arlington County Board approved spending $170,000 to bring back temporary employees and fund the reopening of these two branches for express service. However, the original plan was to reopen in January and to allow up to 30 minutes of browsing.

The delay from January to March, says Gable, was due to a spike in cases after the holidays and continued community spread of the virus.

For the express service, library staff on-location will be a mix of temporary and permanent employees. Due to the county’s hiring freeze enacted last March, the library has not been able to fill vacant positions. However, the allotted $170,000 will fund bringing back a number of temporary employees that were let go in the spring.

No Arlington County library has been fully open since March 2020 due to the pandemic. Only Central Library has remained open for limited pick-up of holds placed online, a “more labor-intensive model” than normal due to health and safety protocols, including quarantining returned books for 72 hours.

Sundqvist says that library staff have heard from the public about how much they want the libraries to fully re-open, but are remaining cautious.

“It was a hard, difficult decision for us to close [back in March 2020],” says Sundqvist. “It’s important when we do re-open that it’s sustainable and we don’t have to close down again.”

The express library service at two branches is a way to re-open safely while remaining pared down, he said. There’s no timeline yet for the reopening of the other branches in the system, though six locations are currently available for book-drop off only.