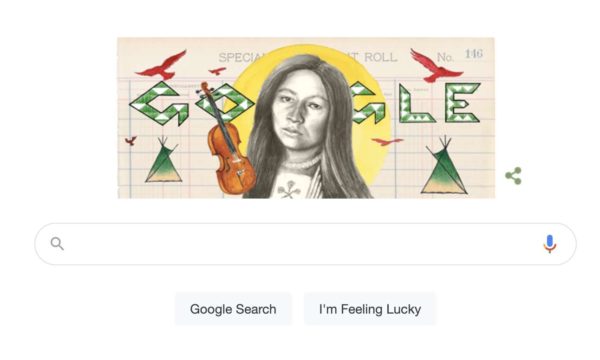 Zitkala-Ša (pronounced “Zit-KA-la Sha”), an Indigenous rights activist and a former Arlington resident, is the Google Doodle today (Monday), in honor of her 145th birthday.

The writer, editor, translator and political activist of Yankton Lakota Sioux descent lived in Lyon Park for 13 years before her death in 1938.

She is featured in the doodle with illustrations of cardinals, as her name translates to “Red Bird,” as well as a violin, which she studied at the New England Conservatory of Music.

She recently received recognition from Arlington County as well. On Dec. 12, the Arlington County Board approved a request by the Lyon Park Citizens Association to rename Henry Clay Park after her. The park at 3011 7th Street N. remains closed while it undergoes extensive renovations, which the county expects to complete by April.

Born in South Dakota in 1876, Zitkala-Ša left her reservation at eight years old to attend a manual labor school. There, she was given the name Gertrude Simmons, her long hair was cut and she was forbidden from speaking her native language.

“Although she enjoyed learning to read and write, she experienced first-hand the damage of having her heritage stripped away,” Arlington Public Library wrote about her. “Feeling torn between her life on the reservation and her forced assimilation into white mainstream culture, Zitkála-Šá pursued higher education and distinguished herself as a public speaker on social and political issues.”

Before diving into political work, she attended college, taught at a boarding school for Native Americans and studied violin at a conservatory.

In 1925, she moved with her husband Capt. Raymond Talefase Bonnin to 261 N. Barton Street in Lyon Park, where they lived until their respective deaths in 1938 and 1942. Both are buried in Arlington National Cemetery and their home still stands at the corner of 3rd Street N. and Barton Street.

The couple founded the National Council of American Indians and advocated for voting rights, healthcare, legal standing and land rights, the library said.