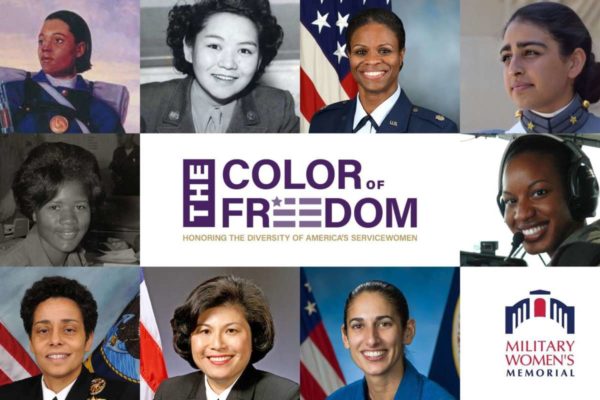 (Updated at 3:50 p.m.) A new exhibit at Arlington National Cemetery honors the contributions of servicewomen of color to the United States.

The exhibit, called “The Color of Freedom: Honoring the Diversity of America’s Servicewomen,” opened over the weekend at the Military Women’s Memorial, located at the end of Memorial Avenue near the cemetery’s main entrance.

Arlington resident Rita Paul, who joined the military as a single mother and spent nine years in the U.S. Army, welcomed the news of the exhibit.

“Right now, it is hard to see what is going on in our country surrounding people of color, specifically women,” Paul said. “As a servicewoman, there has always been a sense of honor and pride, and I think now, more than ever, if we can highlight the importance of positive representation, it will help make a difference.”

After retiring from the military, she started working for Comcast, which is sponsoring the exhibit.

“Women veterans of color have and will continue to play an integral role in our nation’s military and service institutions,” said Brig. Gen. (Ret.) Carol Eggert, Senior Vice President of Military & Veteran Affairs at Comcast NBCUniversal, in a statement. “We’re proud to elevate their voices and stories of service to our nation’s defense.”

Visitors to The Color of Freedom will also have access to an educational program for students, a speaker forum and a digital exhibit.

“This exhibit is a perfect example of the extraordinary, yet untold story of the thousands of women of color who for decades upon decades have made remarkable contributions to our military and to America,” said Phyllis Wilson, President at the Women In Military Service For America Memorial Foundation.

The Military Women’s Memorial recently announced the National Registration campaign to preserve the stories of the three million women who have served in the military.

Those planning a visit can reserve timed tickets for free.