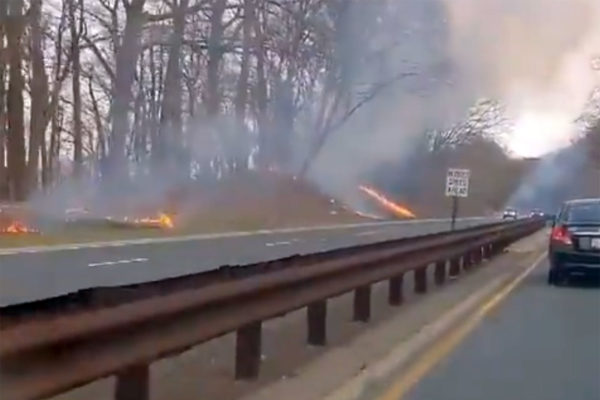 The fires were first reported just before 6 p.m., and ultimately prompted a response of at least a half dozen units from the Arlington County, Montgomery County, and Joint Base Myer-Henderson Hall fire departments.

Two of the brush fires were extinguished relatively quickly. The third was reported out around 6:45 p.m.

“At this stage, we do not know the cause of the fires,” Blunt said. “This incident serves as a reminder of the increased fire danger due to the recent dry and windy weather conditions. We again ask that everyone properly discard smoking materials and not have any open burns.”

A Red Flag Warning was in effect in Arlington and the region over the weekend, amid high winds and a lack of recent rainfall. Brush fires were reported in Loudoun County and Montgomery County on Sunday.

More on the GW Parkway fires, below, via social media.

Fire in brush and trees on east side of GW Parkway about mile north of 29 exit. Not pictured is @ArlingtonVaFD present and en route. No traffic jam seen northbound yet. @ARLnowDOTcom pic.twitter.com/Q4h4SDxWgJ

Report of multiple fires along the GW Parkway north of the Key Bridge. @ArlingtonVaFD on scene. @ARLnowDOTcom https://t.co/7Sm4JVTRZx

GW parkway by the scenic pull off is on fire. Two patches, but trucks only covering one so far. @ARLnowDOTcom pic.twitter.com/pJ5rMHO3Zp

#Update Our initial units are working to extinguish the brush fires and have observed additional fires extending north on GW Parkway. Additional resources have been requested to the scene.

#FinalUpdate All brush fires are now out. Units will be clearing NB GW Parkway shortly. Expect residual traffic delays. Our thanks to @FortMyerFire and @mcfrs for their assistance.
—#REMINDER – there is increased fire danger in the region due to low humidity and gusty winds.