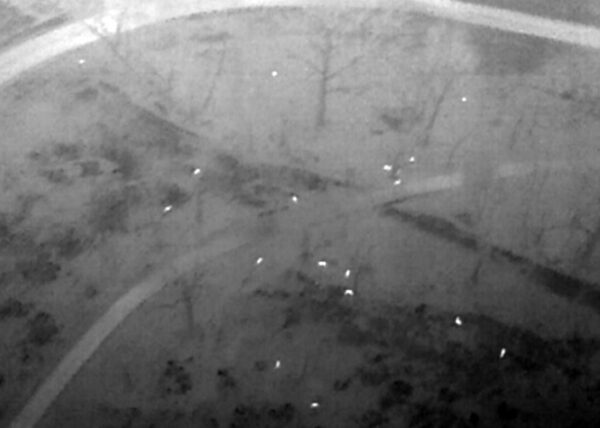 A fleet of drones will take to the skies above Arlington next month in an effort to figure out how many deer call the county home.

The drones will be piloted by a firm contracted by the county and overseen by Arlington County police. Normally, drone flights this close to D.C. are strictly prohibited, but Arlington is being granted special permission by the Federal Aviation Administration and other federal agencies. The county is also coordinating with Reagan National Airport.

The drones will look for heat signatures in the woods in order to develop a count of Arlington’s white-tailed deer. This will be “the first accurate measure of Arlington’s deer population,” the county says, noting that “only anecdotal data… currently exists.”

The dones will be launched just before sunrise on Monday, April 5 and the count will continue until just after sunset, for up to two weeks.

The county is careful to note that the drones will only be looking for deer and will “not identify people.”

“We’ve all seen deer in the County at one time or another,” said Alonso Abugattas, the County’s Natural Resource Manager. “We’d like more than just anecdotal evidence. We want to clearly see how many and where they are so we can mindfully steward our natural resources.”

Thermal and infrared imagery has helped improve counting by relating animals’ unique heat and visibility signatures to precisely count only deer. In one study, it was shown that Unmanned Aerial Vehicles (UAVs), commonly referred to as drones, can be about 43-96% more accurate than ground or human-made observations in counting wildlife. Montgomery County, MD, has conducted UAV deer surveys in locations throughout Montgomery to determine carrying capacity.

The drones will be flying over Arlington beginning a half hour before sunrise April 5 (weather permitting) each day until 30 minutes after sunset, until the survey is completed. They will not be flying at night. The survey could take up to two weeks but is weather dependent. Drones are not permitted to fly over Arlington except for very limited instances. Arlington has coordinated the project with US Department of Homeland Security, Federal Aviation Association (FAA), Transportation Security Administration, Ronald Reagan National Airport, and Arlington County Police Department (ACPD). In accordance with FAA guidelines, ACPD will be onsite monitoring the drone flights.

This will be the first accurate measure of Arlington’s deer population. Only anecdotal data on Arlington currently exists. By 1900, white-tailed deer population had been destroyed in most of Virginia. Through the 1940’s to 1980’s with restocking efforts, laws protecting deer and favorable habitat, deer have rebounded at an exponential rate in Virginia.