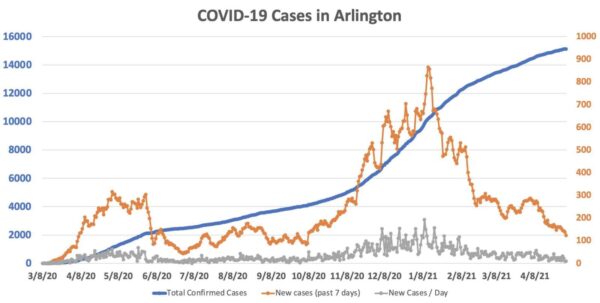 Coronavirus cases in Arlington are down, today hitting the lowest rate of new cases since early October.

That’s the good news. The bad news is that the pace of vaccinations is also trending down.

Overnight only nine new COVID-19 cases were reported in Arlington by the Virginia Dept. of Health, the first single-digit daily case count since Oct 1. The seven-day trailing total of new cases currently stands at 123, the lowest point since Oct. 7.

Since April 1, 25 new hospitalizations and seven deaths have been reported in the county.

Daily vaccinations, meanwhile, appear to have peaked and are trending down. 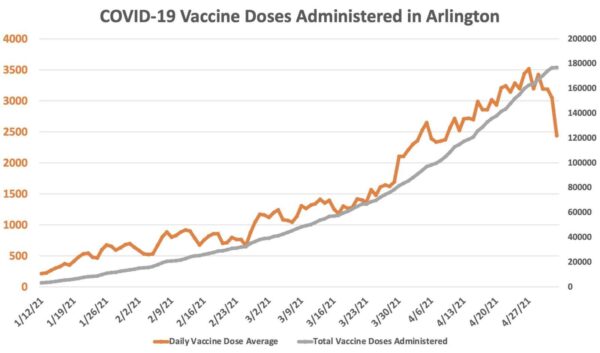 The Virginia Dept. of Health only reported 354 vaccine doses administered in Arlington in its latest daily figures this morning. That brings the seven-day trailing average down to 2,441 doses administered, the lowest point since April 9.

The slowing rate of vaccinations in Arlington, despite the county having one of the highest rates of vaccine interest in the nation (92%), seems to be part of a national trend that is increasingly concerning to public health officials.

The New York Times reported today that “there is widespread consensus among scientists and public health experts that the herd immunity threshold [for COVID-19 in the U.S.] is not attainable — at least not in the foreseeable future, and perhaps not ever,” contradicting earlier hopes that widespread vaccinations may one day relegate the virus to being relatively rare.

Officials instead “are coming to the conclusion that rather than making a long-promised exit, the virus will most likely become a manageable threat that will continue to circulate in the United States for years to come, still causing hospitalizations and deaths but in much smaller numbers,” the Times reported.

Other experts are a bit more optimistic in tone, suggesting that slower but steady vaccination rates over the summer can result in a relatively quiet fall, echoing the experience of Israel and the U.K., which have each at least partially vaccinated 50-60% of the population, compared with just under 44% of the U.S. population.

The UK and Israel have also gotten their levels of test positivity down to 0.1%, lowest for each in the pandemic https://t.co/0d5kq0FZvY pic.twitter.com/emdJlz0bEw

"We are going to continue to chip away and get more people vaccinated over the course of the summer," says @ScottGottliebMD. "If we can get 2/3rd of the population vaccinated or a little bit better than that it is going to be a good level of protection." pic.twitter.com/bi13XNmqVv

Faced with declining vaccination rates, Arlington County announced over the weekend that it would start conducting walk-in vaccinations for the first time, after months of only accepting appointments.

Walk-in vaccinations are being offered this week at Walter Reed Community Center (2909 16th Street S.) and Crystal City (2100 Crystal Drive), according to a county press release.

There are no residency requirements for walk ins tomorrow (May 2). Anyone in the DMV is welcome. Come get your shots!