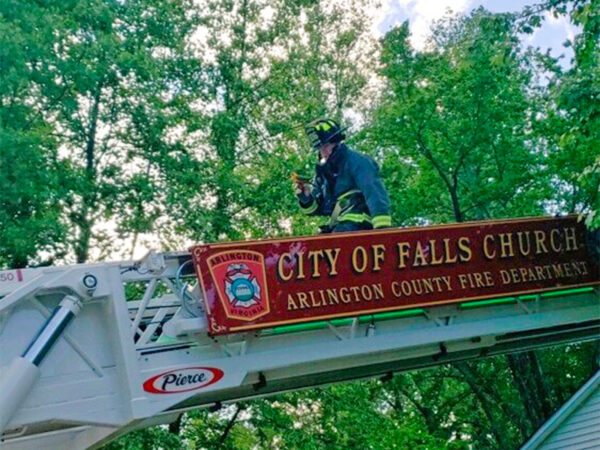 Yesterday evening the fire department received a “public service” call for a prized sun parakeet that was stuck in a tree. The bird’s owner was out on a walk with her avian companion when “the bird was spooked by a dog and flew into a tree and did not come down,” ACFD spokesman Taylor Blunt tells ARLnow. She called the fire department after running out of options for getting the bird down.

The crew of Truck 106 responded and used the fire engine’s ladder to gently grab the bird from its perch above a house, bringing it back to its grateful owner.

“As firefighters, we never know what our day will be like!” the fire department said on social media this morning. “Happy to help.”

“This was an interesting run for us,” Blunt added.

The bird rescue happened around the same time as other ACFD crews were battling an apartment fire on the 1300 block of N. Pierce Street in the Radnor/Fort Myer Heights neighborhood, near Rosslyn. No injuries were reported as a result of the fire.

As other units were battling an apartment fire in Rosslyn yesterday, the crew from T106 was called to assist a prized sun conure down from a tree. As firefighters, we never know what our day will be like! Happy to help. pic.twitter.com/RDhHM9NK3G

#Update The fire is out and units are checking for extension. All occupants were able to get out of the apartment and there were no injuries to civilians or firefighters. Units will be clearing the scene within the next 30 minutes.